This week's crash of LUS Fiber's Internet service, coming on the heels of an email problem, has some customers worrying about their service. 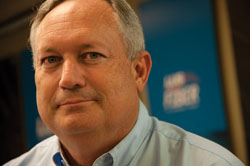 This week's crash of LUS Fiber's Internet service, coming on the heels of an email problem, has some customers worrying about their service.

But Lafayette Utilities System Director Terry Huval says the proximity of the two incidents at the municipally owned LUS subsidiary, a fiber-to-the-home network, is just coincidence.

The email product was one of the strongest performers within the LUS Fiber system, Huval says, until last week when "we started seeing issues" in speed and performance. Adjustments were made, but in the end the system had to be shut down so a new storage product could be installed on Monday, according to Huval.

During that time, while email service was sketchy or non-existent, the Internet service was still working, which means customers who used Gmail or other email providers were able to access their mail without any problems.

"The Internet was working fine; it was just the email product we had," Huval says.

And by Tuesday morning, the email system was back to working fine, and Huval was able to report that to city-parish councilmen who asked for an update. But by Tuesday night (about the time the polls closed), it was clear there were new problems, this time with the Internet service.

"As we worked through the night, it became clear an attack was happening," Huval says.

What happened was a [successful] attempt to overwhelm LUS Fiber's DNS servers by sending an inordinate amount of requests or messages to them. DNS servers don't contain personal or customer data, but are more like traffic directors or phone books, in that they contain "directions" to specific websites. These DNS "floods" are a type of attack called a "denial of service" attack. They're not that uncommon, and range from attacks on major Internet service providers to sore-loser video gamers who try to block their rivals.

"It was not an intrusion, and it wasn't a 'hack.' That term really shouldn't be used," said William Ness, chief communications analyst for LUS Fiber. "DNS servers are completely public already. There's no information to steal there."

Nevertheless, a disruption in service has to be avoided, Huval acknowledges: "We got everybody together, because we can't have these kind of failures."

Consultants from Cisco and other technology partners were called to analyze the system's firewalls and other preventative measures, including and intrusion detection equipment.

"I'm listening to the experts, and the experts have indicated that what we have is what we need to have," Huval says. "In fact, they've assured us that we've gone above and beyond the industry standard."

All that being said, there have been frequent discussions among LUS Fiber users on social medial over the past couple of months about issues with the email and Internet systems. That's not indicative of systemic problems, according to Huval.

Ness says LUS is not worried that it has become a target for hackers or bored teenagers, as the case may be.

"Dealing with these things has always been a cat and mouse game," he says. "They're always evolving, and we're always trying to make sure the system can handle what comes our way. We've been very public about our response to this, and we're confident in our response."

It's not something that can be completely prevented, anticipated or blocked, Huval adds.

"We can't control what these other people are doing," Huval stresses. "Our job, which we take very seriously, is to make sure our service is as reliable as possible."