His mind so made up long in advance of the "disciplinary hearing," board President Hunter Beasley slipped up and tried to adjourn the meeting before the vote to fire the superintendent even took place. 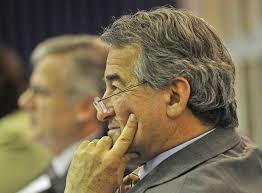 It's really sad that it's come to this, but the Lafayette Parish School Board voted 7-2 late Thursday night to fire Pat Cooper, one of the most respected superintendents in the state.

His (and his five obstructionists') mind so made up long in advance of the so-called "disciplinary hearing" that started Wednesday and extended into Thursday, board President Hunter Beasley slipped up (as he is prone to do) and tried to adjourn the meeting before the vote even took place. The firing is effective immediately.

Before the termination, Cooper, a leader in school reform, gave an impassioned speech about why he got into education and why he believes every child can achieve success. He vowed to appeal the board's decision, and we (as you might suspect) will have much more to say on this matter Friday.

But for now, we offer this: Lafayette, you should be ashamed these elected officials, most of whom will not even be on the board come January. And you should let them know it, all seven of them.