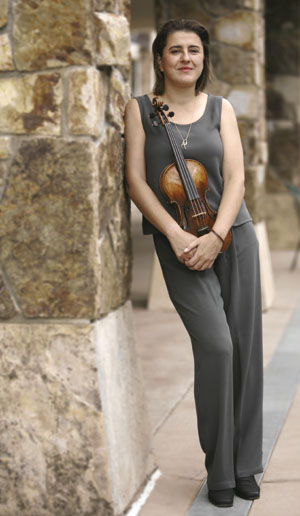 Nadja Salerno-Sonnenberg isn’t your typical concert violinist. The calm reserved world of classical music can’t keep this firecracker from exploding on stage, her hair flying, arm sawing, as music bursts out of her. She describes every single notes she plays as “full of vibrancy and meaning and excitement and tenderness and purpose and everything that makes music so damned intoxicating to begin with.”

At 8 years old, Salerno-Sonnenberg was recognized as a child prodigy, emigrating to the United States from Italy with her family to study at the Curtis Institute of Music. She later studied with Dorothy DeLay at The Juilliard School and became the youngest winner ever of the Walter W. Naumburg International Violin Competition. In 1999 she received the prestigious Avery Fisher Prize awarded to instrumentalists who have demonstrated “outstanding achievement and excellence in music.” While she has played and recorded with renowned classical musicians, she also crosses over into other musical genres, collaborating with the likes of fiddler Mark O’Connor, vocalist Mandy Patinkin and Brit pianist Joe Jackson.

Salerno-Sonnenberg, who directs a chamber orchestra with a packed touring schedule, travels to Louisiana as often as she can. Her fascination with the bayou state started with New Orleans years ago and grew into a love affair with Acadiana as well. “New Orleans is a fabled city, but I love the people, the attitude as well. And I just can’t get enough of the food.” On a previous trip, at a reception after a performance, she asked what people do for fun in Lafayette. One pundit answered alligator hunting, so 47-year-old Salerno-Sonnenberg did just that during a September 2007 detour. “It was quite exciting,” she says. This year, she’s delighted to be arriving for a one-week residency at the height of crawfish season. “Don’t eat them all before I get there,” she says. “Save some for me.”

On March 12 at 6 p.m., Michael Blaney of UL’s Orchestral Department will deliver a talk, “Nadja Salerno-Sonnenberg: a Classical Perspective,” at Barnes & Noble (5705 Johnston St.). On March 14 at 7:30 p.m., the Performing Arts Society of Acadiana presents Nadja Salerno-Sonnenberg with Anne-Marie McDermott, a recital of works by Bach, Debussy and Franck, at the Heymann Performing Arts Center. For more information, visit www.pasaonline.org or call 237-2787.