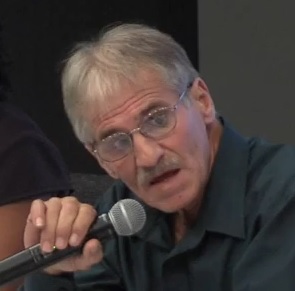 After being outed by The IND for a series of bigoted gems of social media "wisdom" - and defending those positions in a follow-up interview with KATC TV3 - District 1 school board candidate "Coach" Don Gagnard's Facebook account is no more.

The IND broke the story on Gagnard's crazy Facebook musings - which run the gamut from hate rants aimed at President Obama to verbal attacks on homosexuals and African-Americans - in a blog posted Monday morning. Gagnard's story has since caught on like wildfire, first on social media and then Monday afternoon with KATC, where the former school system employee adamantly defended his comments, saying "yes," he does hate "faggots, bums, illegal aliens, Veterans mistreatment and most of all: OUR HITLER PRESIDENT."

In one post, Gagnard calls himself a racist, but in talking with KATC, he backpedals, saying "coaches are not racists."

After reiterating his 24 years experience as a coach in the Lafayette Parish School System, Gagnard continues:

I've bailed black people out of jail and bought them trucks. If you call me a racist, that's going to flip back on you. But the faggot thing, yea, you can stick with that.

What makes Gagnard's story even more disgusting is that he somehow managed to capture enough support, 36.5 percent, during last week's election for a runoff on Dec. 6 for the District 1 school board seat against Mary Morrison.

Though his Facebook was alive and well throughout Monday, a search conducted this morning bore no matches, leaving us to believe the coach is attempting some form of damage control, albeit feebly considering his comments to KATC.

Since his Facebook page is no longer active, we at The IND, thanks to a number of screen shots captured between Friday and Monday, will be rolling out a series over the next few days; we're calling it "The Wit and Wisdom of 'Coach Don,'" so stay tuned.