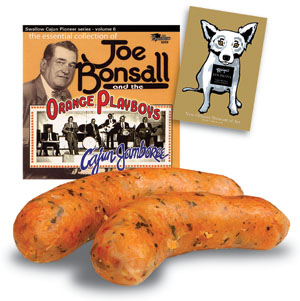 LENTEN LINKS
Lent may be a time of penance, but there’s no suffering in south Louisiana when it comes to eating boudin. Joey’s Specialty Foods & Catering on Bertrand Drive makes seafood boudin links so tasty you might just convert from the meaty version altogether. You can still indulge your sit-on-the-tailgate habits because Joey’s will heat up the boudin on the spot. (Unlike pork boudin, the seafood version can’t sit in a rice cooker waiting for customers as the seafood is too delicate and will disintegrate.) Better yet, take it home and run it under the broiler till the casing browns and crackles and you can slice it onto crackers, or squeeze the spicy filling out and use it to stuff anything from sea bass to bell peppers. Pre-packaged as a trio of links for $3.98 a pound, this boudin has shrimp, crabmeat and crawfish, seasoned and spiced to perfection with fresh ingredients like bell pepper, onions, celery, green onion, parsley and garlic. For more information call Joey’s at 237-3661. — Leslie Turk

DOG SHOW
Who let the dog in? The marble halls of the New Orleans Museum of Art have been turned into a kennel for the most famous dog in America. George Rodrigue’s iconic Blue Dog is on display in all his many transformations, from loup garou to anti-David Duke political statement. Rodrigue’s Louisiana: Forty Years of Cajuns, Blue Dogs, and Beyond Katrina, opened March 1 at NOMA to rave reviews from art critics like The Times-Picayune’s Doug McCash, who came out of the closet as a Rodrigue fan. There are scoffers who denounce the Blue Dog’s popularity as kitsch, but many feel a soul connection to the penetrating stare of the pup and others cheer on the artist for his success in a society that doesn’t ordinarily value art. Whatever your stance, this is a blockbuster show for the New Iberia native and a great opportunity to see some of his early, haunting, pre-Blue Dog work. Rodrigue’s Louisiana: Forty Years Of Cajuns, Blue Dogs, and Beyond Katrina, a 40-year retrospective, is on exhibit Wednesdays from noon to 8 p.m. and Thursdays through Sundays from 10 a.m. to 5 p.m. through June 8. For more info, call NOMA at (504) 658-4100 or visit www.georgerodrigue.com. — Mary Tutwiler

A TASTE OF ORANGE
The latest and sixth installment in Swallow Records’ Cajun Pioneer Series shines the spotlight on Joe Bonsall and the Orange Playboys (not the Joe Bonsall of the Oak Ridge Boys fame). Born in Lake Arthur in 1921, south Louisiana’s Bonsall begin playing the accordion professionally in 1951 as the leader of the Orange Playboys, gigging regular at nightspots in east Texas and southwest Louisiana. The Essential Collection of Joe Bonsall & The Orange Playboys spans the band’s career with 27 tracks from the ’60s through the ’80s, and while the quality of the recordings are at times rough, the liner notes explain, “On all of the recordings, the original sound of the time was preserved.” Cajun standards abound, with one particularly unusual rendition of Jim Croce’s “Bad, Bad Leroy Brown,” sung in French by Ivy Dugas. The Essential Collection of Joe Bonsall & The Orange Playboys retails for $14.98 and can be ordered online at www.floydsrecordshop.com. — R. Reese Fuller