A ragtag group of friends and small-time felons do the British government’s dirty work in The Bank Job. 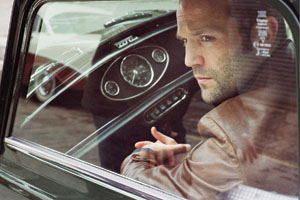 The twists and turns that make up the heist at the heart of The Bank Job are just about stranger-than-fiction enough to be true. Maybe. Sort of. OK, no one knows for sure.

In the fall of 1971, in one of the biggest and most infamous crimes of its kind, a branch of London’s venerable Lloyds Bank was robbed, its vault breached from below, its safety deposit boxes ransacked for a never-fully-determined amount. For a few days, the robbery was widely reported in the British press — the burrowing bad guys had used walkie-talkies during the break-in, and a conversation that was caught and recorded by a ham radio operator in the area was played on media airwaves. And then … silence. A few guys were nabbed and served a little time, but it’s generally speculated that someone (or a few someones) got away with a really big something. Maybe even with a little help from friends in high places. Maybe even because those friends in high places had something to lose, something more valuable than whatever was in most of those split-open safety deposit boxes.

What a wonderful skeleton of a story on which to hang felonious flights of fancy. And that’s what screenwriters Dick Clement and Ian La Frenais (Flushed Away, Across the Universe) have done, supposedly basing their version of events on the testimony of an anonymous inside man. And there are certain strains of the tale the informant spins that definitely smack of truth. Some parts of The Bank Job you simply couldn’t make up if you tried. (Hollywood does it all the time and usually falls far short of this kind of realistic chaos.) But in the end, it doesn’t really matter if the movie is an at-long-last historically accurate tell-all or not — The Bank Job is full of the quirks of every-day coincidences, funny and frantic, chancy and calamitous.

Terry Leather (Jason Statham) spends his days rolling back the odometers on the speedsters he tries to sell and dodging the crowbar-wielding heavies he owes money to. A family man whose shady past competes with the sunshine of an adoring blonde wife (Keely Hawes) and two adoring blonde daughters, Leather finds himself on the receiving end of a tip, one of those sure things, a big job with a big payoff and no discernible down side.

Old flame Martine (Saffron Burrows) turns up with information about a bank whose security system is down for a short time — a bit of intel she claims to have picked up from a man she’s seeing who runs an alarm company but in fact is part of an elaborate scheme to pay back her spy friend Tim Everett (Richard Lintern), who helped her out of a drug-smuggling jam. In exchange for her get-out-of-jail-free card, Martine has agreed to put together a team to hit the bank on the government’s behalf. The lowlifes will think they are getting the score of a lifetime, and the government will get a stash of photos that show a royal personage in a rather compromising sexual situation, photos that have been safety-deposit-boxed by a particularly problematic black militant named Michael X (Peter De Jersey) who continuously uses them as blackmail to stay out of jail. The heist, therefore, isn’t what it seems from the beginning, and everything only unravels from there. What results is a caper of crooked cops, porn kings and compromised members of Parliament. Smarter-than-he-seems Leather navigates the ever-changing landscape nimbly, slowly clueing in to his part in the bigger picture and fighting for control of out-of-control circumstances.

Director Roger Donaldson (Thirteen Days, The Recruit) knows suspense and how to stretch it to just the right moment. He works from a lively script that leavens its more swinging Ocean’s Eleven elements with a few doses of dark reality late in the game. But the reason The Bank Job pulls it off is its delicious cast: the gravel-voiced Statham (who should be more famous already), the sad-eyed Saffron Burrows, the posh prince of the spy service Lintern, the softly satanic underworld boss David Suchet (Poirot).

It’s fun to see the strands of The Bank Job come together, fun to see these crafty characters bob and weave their way through Clement and La Frenais’ fevered imaginations of what that 1970s burglary might have been. The movie won’t ever be as memorable as the actual event; it’ll disappear as quickly as anyone who might have had anything to do with that vault did back in the day. But it’s a fine way to while away 110 minutes some afternoon or evening, one bank transaction that earns its high rate of interest.