Our View: It‘s reasonable, temporary and invests in Lafayette‘s future. 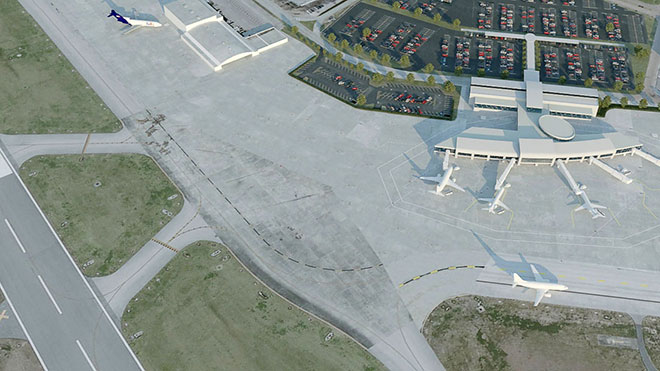 Lafayette essentially has two ways of introducing itself to outsiders - of making a first impression: our interstate gateways and our airport. The former make a decidedly bad impression while the latter falls far short of underscoring what we think of ourselves and what we have to offer as the dynamic, progressive, entrepreneurial seat of Cajun and Creole culture in South Louisiana. Lafayette Regional Airport is a well-run facility, and in terms of record-breaking passenger counts over the last several years it has been successful in spite of itself.

On Saturday, Dec. 6, voters in Lafayette Parish will be asked to approve a novel tax proposition to help fund construction of a new terminal at LRA: a 1-cent sales tax that is dedicated to the airport and will be collected for only eight months. If approved, the tax will be levied beginning April 1, 2015, and it will expire on Nov. 30 of the same year. It cannot be extended. It cannot be diverted to other needs; it is only for the airport, and even if we wanted to extend it we cannot by law. It begins. It ends. That‘s that. And it won‘t be collected on sales of food and prescription drugs already exempt from state sales taxes. Buy a new pair of shoes at Brother‘s on the Blvd., you‘ll pay a little extra. Pick up your blood-pressure medicine at Northside Pharmacy, you won‘t.

We call it a novel tax because Lafayette has never before entertained a temporary tax dedicated to a specific purpose. If approved and successful it could become a template for future funding needs such as schools, roads, drainage or public safety.

ABiz supports this proposal and we hope you will, too. Here‘s why:

The current terminal, built in the 1950s, is just too small and cannot accommodate the growth anticipated for LRA in the near term, not to mention the long term. The Aviation Demand Forecast predicts a 40 percent increase in passengers at LRA over the next 11 years. LRA currently has three gates, an insufficient number to meet anticipated demand. The new terminal would have five gates with the capability of expanding to seven. Parking would grow by 40 percent; currently the parking areas - long- and short-term - are 95 percent full four days per week. The new terminal would also offer more amenities for travelers: larger and more convenient baggage claims and check-in counters and more food and beverage offerings both before and after the security gate.

The tax is modest and fair, especially for a parish that is one of the lowest-taxed among all urban parishes in Louisiana. The state sales tax is 4 percent. Lafayette levies an additional 4 percent in sales taxes, making our sales tax rate 8 cents on a dollar. If the airport tax is passed, Lafayette‘s sales tax rate would climb to 9 percent for the eight-month period the tax is collected. But consider our neighbors and comparable cities: Abbeville‘s sales tax is 9.5 percent. Opelousas‘ is 9.75. Mandeville‘s is 9.25 and Lake Charles‘ is 9.

The tax is estimated to raise about $37 million of the $90 million price tag for the new terminal; the rest of the funding will be obtained through airport bonds and via state and federal grants. But those grants won‘t come without some buy-in by the community. And a parish-wide sales tax, as opposed to a property tax, distributes the burden widely including to out-of-towners who come to Lafayette to shop. Yes, the airport is within the city limits of Lafayette, but to say the airport should be only the city of Lafayette‘s concern is to also say the parish jail or parish courthouse should be the city‘s concern because they‘re within the city limits. All of us - in Broussard, Carencro, Duson, Lafayette, Scott, Youngsville and the unincorporated parish - use the airport, and a bigger, better airport benefits us all.

The timing is right: Who can argue that Lafayette doesn‘t have serious needs in terms of school facilities, roads, drainage, etc.? But it will be some time - a few years at least - before the school board or council make any kind of tax proposals. This temporary tax will be over and done in a blink.

This is, ultimately, an economic development issue. If we invest in the airport it will pay dividends by helping expand economic activity. Currently about 24 million pounds of cargo pass through the airport annually, with FedEx and UPS being major players. There are more than 1,100 oil and gas companies in the parish - 16 of the parish‘s 30 largest employers are in the oil patch - and all of them rely on our maxed-out airport for transporting workers and cargo. Expanding the terminal and long-term parking, coupled with Lafayette‘s stellar economic climate, make the parish a more attractive destination for businesses looking to relocate or expand.

And what better way to make a great first impression for a business leader looking at Lafayette as a prospective headquarters than having a 21st century airport that lives up to our reputation as a great place to live and do business?