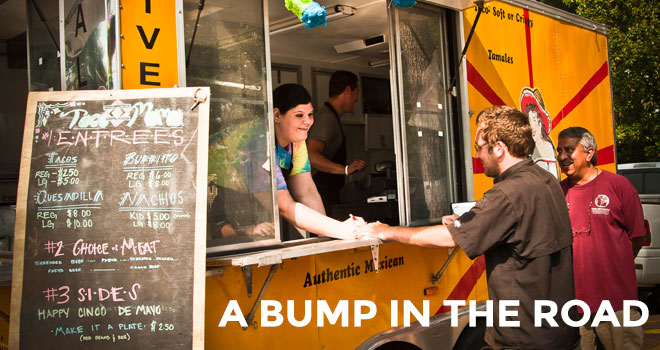 The Lafayette food truck scene is slowing down but not stopping.

The Lafayette food truck scene is slowing down but not stopping. By Nick Pittman 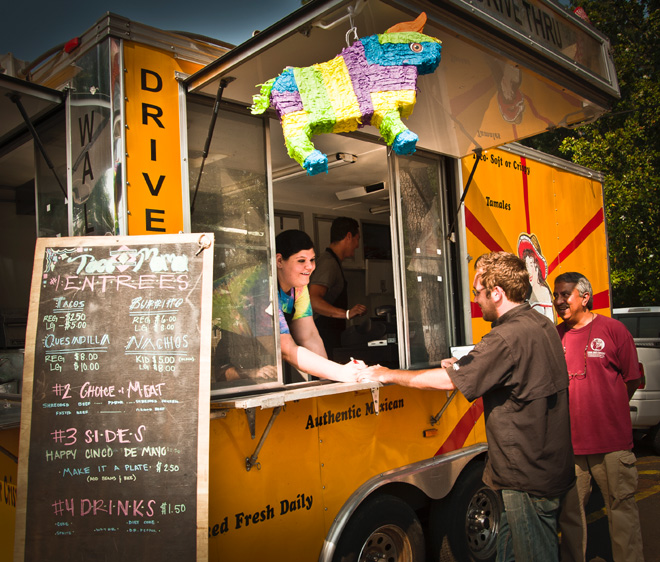 Like nearly half of Lafayette's burgeoning food truck fleet, Taco Mama folded within months of opening its window.

At the peak of Lafayette's food truck craze, a full-course meal at a sit-down restaurant could have been consumed in the time spent in some of the lines at the monthly Food Truck Roundup. If this November's roundup was an indicator, the once-thriving scene is running on fumes. A stark contrast to those long lines, this month saw more menu items on the A-frame, dry erase boards outside of each truck than patrons in line. Even on a beautiful cool day, barely 50 people showed up to peruse the nine vendors, a drop from past roundups, one featuring 16 trucks. Most trucks this time didn't have a line. At the busiest, the line at Viva la Waffle - easily the most popular truck in Lafayette - was four people deep. At nearly every window, there was no wait.

"It does seem to be going through a small decline, although there are some new trucks out," says Paul Ayo of E's Kitchen, which puts together the roundups in Parc Lafayette. "The roundup is still popular because it is a great family friendly event. The crowds may have slimmed down a little but they are more consistent now."

The food truck revolution kicked off in November of 2010 with Taco Mama, but found its footing in the following years, especially after Viva la Waffle hit the streets in 2011. At one point, food trucks were cooking with grease in Lafayette: new ones emerging constantly on social media, plotting out their menus and whereabouts, which both changed by the day. Random mini roundups joined the established monthly roundups, which even drew trucks from Baton Rouge and New Orleans. Trucks ventured into nearby zip codes, bringing lunch to places like New Iberia and Maurice. Often they could be found in centralized locations or well-populated office parks. It made sense: Why fight the traffic when you could get a freshly made-to-order meal that pushed epicurean boundaries in the parking lot?

Somewhere in the last four years of food truck madness, the number of trucks may have reached 20, depending on whom you ask. Today, those numbers are cut in half like a donut served up as a hamburger bun at Lil Chubs, a now defunct slider truck. Even popular vendors such as Freetown Fries - ranked at No. 16 on Deep South Magazine's Best Food Trucks of the South - are now parked. Others on the no-roll list include: Pelon's Mexican Hotdogs, Acadiana Grilled Cheese Company, Hibachi Hero, Pane & Vino, The Black Pot Bus and La StrEAT. Local trucks - such as Chef Gregory, Blanchard's, The Bus Stop, Mad LuAnn's, Mamma T's, Rice Kings and Urbano's Taqueria, all attendees of November's roundup - are still rolling.

"The luster has been lost a little bit," says Marla Kristicevich of Freetown Fries, her 2011-birthed food trailer now for sale. She and other food truck diehards are hesitant to call the scene well-done but will admit it is not as bustling as it once was.

Though they remain positive, with the list of trucks that are no longer operating it is tough to argue against a significant decline. The theories and explanations as to why are as varied as the menus the trucks offered, but none of them have anything to do with the quality or service offered at a truck. Instead, it has a lot to do with where the trucks rolled and the problems that plague small business.

"The decline may be because the restaurant business is tough and lots of work. Also a few just got regular jobs that were easier to predict," says Ayo.

Though part of the food truck mystique, not having a permanent place also cost them, according to Tiffany Decou, the real name of Lafayette Food Junkie blogger and KPEL host. "It's hard for people to find them. That was the biggest complaint I heard, people could not find them."

To cure this, one popular truck is a truck no more. The Acadiana Grilled Cheese Company launched in 2013 and was immediately so popular it was not uncommon for its uncommon grilled cheese creations - think boudin or brisket and fancy cheese meltingly coexisting between two slices of grilled Evangeline Maid - to sell out. In August, it shifted to the shelter of a traditional brick and mortar one in the Uptown Lofts on Pierce Street.

"Everyone who was ever part of the scene had really good food. It's just that it's a tough line of work and a bit of a gamble," says AGCC's Dustin Aguillard. "I believe any food truck in the area could do well simply if Lafayette were larger. In my opinion food trucks are best suited for foot traffic in metropolitan cities. Not many people want to fight Lafayette traffic at noon to travel across town and stand in oppressive heat to eat at a food truck."

For Aguillard, his bread and butter was chasing lunch breaks and setting up in office parking lots. However, it was not without its reservations. "Doing this kinda removes the romance of serving the public. Even large offices don't guarantee a lot of sales. Factors like people on vacations, people bringing their own lunch, etc., come into play."

Plus, made-to-order sandwiches, long lines and short breaks don't always mix. "People want their food quickly and my product is best when you can finesse it a bit. A brick and mortar gives me the opportunity to execute each sandwich better."

The closing of Freetown Fries is perhaps the biggest wake-up call to trucks and their followers. Offering homemade fries smothered with things like chicken curry and served with adventurous dipping sauces, Freetown Fries made itself a favorite by adhering to the food truck formula of taking a menu standard and making it stand out, like waffle sandwiches or stuffed beignets.

"It's bittersweet. I really enjoyed doing it but there's so many factors that you can't control and the weather being the main one," says Kristicevich. "In this industry, I would say that was the hardest one." Though acclaimed for her creations, Kristicevich was no chef. Instead, with a background in art and environmental design, this was a three-year experiment to see if she could make it. Three years and a job in her field later and frying in a trailer just didn't stick.

"We were doing well enough," Kristicevich says. However, she didn't find the level of success that would warrant going out full time for lunch. She is debating making a Festival International stop, as she says festivals and special events were a different story. "That was definitely worth it but not as a full time job, more of a supplemental [income]."

This idea of having a go at the food business is concurrent with a theory Decou offers that some trucks may serve as a résumé builder. "I feel that a lot of people see it as an easy way to test the waters and see if their idea is a good one or not. They fail to realize it's still a lot of hard work. Weather and truck repairs will hurt."

For Kristicevich there are two key factors in Lafayette that spell trouble for current and future trucks: the weather and the city's lack of walkability.

"Overall, I think the weather down here is not conducive as much as we would have liked to have seen. For a food truck you get the four-hour window for lunch and if it rains you're dead. It's a wash."
She's not alone in her lament. During the rainy summers of 2013 and 2014, it was hard to find food trucks. At one point in 2013, discussion of one truck's Facebook paged turned to a shelter to drive under - be it an abandoned parking garage or gas station - to feed the masses when the skies turn gray.

If Lafayette were to develop a place for them, such as a spot at the Horse Farm or a food court, Kristicevich could fathom a revival of the scene. These spots and pedestrian friendly layouts - walkability - in cities like Austin lend to permanent spots for trucks that keep their scene rolling.

"Something like that would warrant success for the food truck industry. We just haven't seen that yet," Kristicevich says. "If we could really just find that great location for a food park, that's the one part of the equation that we are missing."