Who was hired and promoted in Acadiana business? 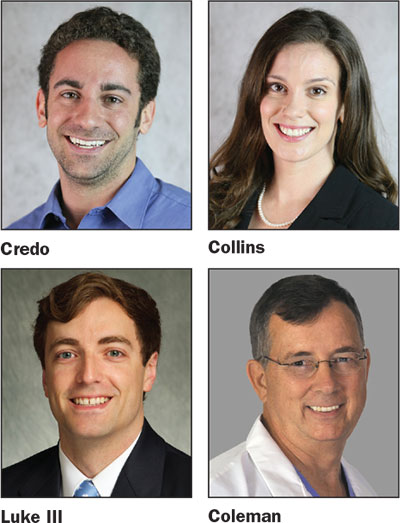 Dr. Keith Credo has joined the B.I. Moody III College of Business Administration at UL Lafayette as an assistant professor of management. Credo's teaching interests include organizational behavior, entrepreneurship and management, and he also focuses on bringing social entrepreneurship service learning opportunities to students. His research interests include organizational ethics, corporate whistleblowing and organizational change. One of Credo's most recent publications in the Journal of Leadership and Organizational Studies highlights the impact of employee perceptions of organizational ethics on workplace safety. Credo is an adviser to several entrepreneurial startups, and is also a member of the board of directors for the SWLA Angels. Keith completed his doctoral work at Auburn University, his MS and MBA studies at Florida Institute of Technology and his undergraduate work at Tulane University. Also at UL's business college, Marisa Collins was named engagement and outreach officer, a newly created position. Collins brings several years of experience with marketing, advertising, public relations, fundraising, and video and film production to her new role. Originally from southern New Jersey, Collins has lived in New Orleans, New York City and Italy, in addition to her years as a Rotary Ambassadorial Scholar to Rio de Janeiro and Rotary Youth Exchange Student to Peru. She earned two undergraduate degrees from Oklahoma State University in 2004, and her multilingual skills include Spanish, Portuguese and Italian. Collins is a member of the Public Relations Association of Louisiana and the705 and is a volunteer for Lafayette Central Park. She also serves as a board member for the Acadiana Press Club.

Cité des Arts has named Daniel Ladmirault program director, replacing Christy Leichty, who has led Cité des Arts since November 2010. Ladmirault has more than three decades of theatre experience at all levels, from community theatre to professional theatre, as well as film, video and television.

Dr. John Luke III, trained in both open and endovascular procedures, has opened a new practice in Lafayette. He treats a wide range of vascular conditions, including aneurysms, carotid artery disease, peripheral vascular disease, and varicose and spider veins. Board certified in general surgery, Luke shares office space with Drs. Christopher LaGraize and Joseph Ghanami at Acadiana Vascular Center. Luke earned his BS degree in microbiology at LSU and his doctor of medicine from LSU's School of Medicine in Shreveport. He did his post-doctoral training in general surgery at Ochsner Clinic Foundation in New Orleans and vascular surgery training at University of Alabama at Birmingham.

Dr. Stephen C. Coleman has joined Lafayette General Medical Center as a teaching physician. Coleman, board certified by the American Osteopathic Board of Obstetrics and Gynecology, will help teach and train residents in OB/GYN medicine. Coleman earned his BA degree from the University of South Florida and his doctor of medicine degree from Des Moines University College of Osteopathic Medicine in Des Moines, Iowa. He completed his internship at Des Moines General Hospital and his residency at Sacred Heart Hospital in Pensacola. He previously worked at Christus Schumpert Hospital and Minden Medical Center in Louisiana and as chief of staff at Troy Regional Medical Center in Alabama, where he was chairman of the department of obstetrics and gynecology.

Aqueos Corporation, a provider of subsea services to the Gulf of Mexico and Pacific Coast, has named Richard Campbell project manager. Campbell has 18 years of subsea welding and construction experience. Aqueos Corporation, which has offices in Broussard and Ventura, Calif., provides marine construction and specialty subsea services including a complete range of commercial diving, remotely operated vehicles and vessel-related services primarily to the offshore oil and gas markets.

Dynamic Industries, a fabricator and service provider to the global oil, gas and energy industries, hosted an open house event in mid-October at its Lake Charles fabrication facility to celebrate the completion of its capital improvements and expansion. "Dynamic's multiple-yard modular fabrication approach is the single solution that solves many challenges by pulling man hours off site, reducing pressure on the site workforce, reducing congestion, improving site safety, and fabricating in a controlled work environment offsite right here in Louisiana," Emile Dumesnil, president & CEO of Dynamic Energy Services Int'l, said in a press release. "Louisiana and Dynamic have the facilities, expertise and experience to get the job done, and we look forward to proving that to Sasol, Magnolia and the many projects that have the wisdom to go modular and go Louisiana."