Ruby Bridges was 6 years old in 1960 when she became the first black student to attend a previously all-white elementary school in New Orleans, one of the iconic moments in the U.S. civil rights movement. 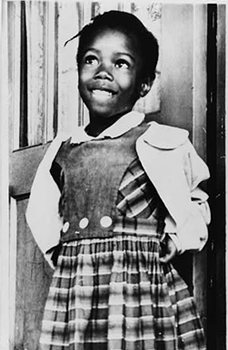 NEW ORLEANS (AP) - Ruby Bridges was 6 years old in 1960 when she became the first black student to attend a previously all-white elementary school in New Orleans, one of the iconic moments in the U.S. civil rights movement. Today, the civil rights pioneer says America looks a lot like it did then: A nation with segregated schools and racial tension.

On Friday - 54 years later to the day when she first walked up the steps to William Frantz Elementary School - she commemorates that event with the unveiling of a statue in her likeness at her old school. Also, she is reuniting with the white teacher who taught her and with the sole-surviving U.S. marshal who walked her to school.

She pointed to the tense events in Ferguson, Missouri, after a white police officer shot and killed an unarmed black man, revelations about racist comments made by owners in the National Basketball Association and how so many American schools have failed to become racially mixed.

"You almost feel like you‘re back in the ‘60s," said Bridges, who is now 60 years old. "The conversation across the country, and it doesn‘t leave out New Orleans, is that schools are reverting back" to being segregated along racial lines, she said.

Back in 1960, Bridges, flanked by U.S. marshals, had to walk past a mob of jeering segregationist protesters to enter her school. One woman shouted threats to poison her. Another woman showed up at protests with a coffin with a black baby doll in it. All the white students at the school were pulled from classes and teachers quit - leaving Bridges as the school‘s only student.

She looks at her own experiences as evidence of a new segregation.

For example, white students returned to William Frantz and the school became integrated, she said. Fast forward to today: The school now occupying the William Frantz building is 97 percent black, according to school data.

A May report by the Civil Rights Project, a research center at University of California-Los Angeles, found that in the South about 23 percent of blacks were in majority-white schools in 2011, down from a peak of 43 percent in 1988. Nationally, the report found that a white student typically sits in a classroom that is three-fourths white while a typical black or Latino student is in a classroom with eight white students.

In New Orleans, after integration, whites generally sent their children to private or parochial schools - and that preference continues today. Blacks today make up 86 percent of the public school enrollment, according to 2013 data from the Cowen Institute for Public Education Initiatives at Tulane University.