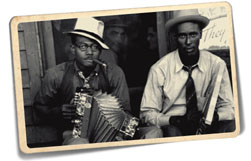 So far, the only three sites in Acadiana on the trail are The Creole Heritage Folk Life Center in Opelousas, The African American Museum in St. Martinville and Lake Charles' Black Heritage Festival.

According to the Lieutenant governor's office, plans are underway to expand the trail:
The trail will be expanded in future phases as existing sites' abilities to cater to tourists are enhanced, and as new sites are identified. Sites on the first phase were chosen due to their historic and cultural significance and their current ability to cater to travelers and locals.