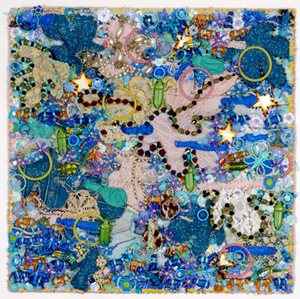 New Iberia native and Opelousas resident Shawne Major has been chosen as one of 81 local, national and international artists to participate in a groundbreaking art show in New Orleans. Prospect.1 New Orleans, slated for November 2008, will be the largest international exhibition of contemporary art ever presented in the United States. Conceived by Dan Cameron , an international New York-based curator who took on the position of Visual Arts Director at the New Orleans Contemporary Arts Center, Prospect.1 New Orleans is designed to help revitalize the Crescent City by establishing New Orleans as a major center for contemporary visual art exhibitions. Major is the only artist from Acadiana in a who’s who of artists hailing from 36 countries and five continents.

Major received her BA in Fine Arts from USL in 1991, and earned a master’s degree from Mason Gross School of the Arts at Rutgers University. Her work is best described as multi-media. She creates huge tapestries interwoven with everything from beads and buttons to glow in the dark rubber lizards. Major states that her approach is to “create a magical and sacred space that is a distillation of ideas, memories and fragments of experience associated with growing up in Southwestern Louisiana.” The objects she weaves into her hangings are her artistic vocabulary--”kitsch, ersatz and craft materials, objets trouve, personal objects, traditional feminine elements like lace and ribbons” that she says “draw heavily upon my identity as a woman of working class southern background.”

Major currently has a show hanging at the Opelousas Museum of Art . “Sacred Space” includes 15 mixed media hangings, and will continue through April 26. The Opelousas Museum is open Tuesday through Friday, 1-5 p.m., and Saturdays 9 a.m. to 5 p.m. For more information, call the museum at 942-4991. To see more of her work, click here . Major is represented by Heriard-Cimino Gallery in New Orleans.

Prospect.1 New Orleans will fill a total of 100,000 square feet of exhibition space, divided among various New Orleans neighborhoods, including the Warehouse District, Bywater, the French Quarter, the Marigny, and Treme. Some of the venues are the Contemporary Art Center, the New Orleans Museum of Art, the Odgen Museum of Southern Art, The Historic New Orleans Collection, The Mint, the WWII Museum, the Museum of African Art and Long Vue House and Gardens as well as converted warehouses, commercial structures and other public spaces in the city. The exhibit will run from November 1 through January 18, 2009.