Downtown continues its drive to diversify business and entice Lafayette residents to shop and live in the heart of the city. 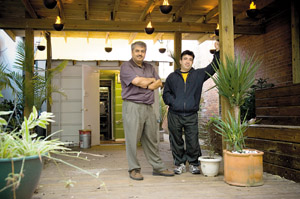 While an encouraging renaissance has been under way in downtown Lafayette in the past decade, independent business owners are making it clear they're not nearly done sprucing up the district. Downtown is undergoing another round of development ' perhaps its most aggressive to date ' and among the fresh crop of businesses scheduled to dot the landscape in coming months is a convenience store, Mexican and Italian restaurants, a new coffee shop and a host of mixed-use developments.

"Everything seems to be falling into place, and we're feeling really good about the progress," says Cathy Webre of the Downtown Development Authority, which has worked tirelessly to diversify downtown's offerings. Particularly exciting is the spectrum of ethnic eateries, she says, a charge being now being led by independent restaurateur Nidal Balbeisi of Zeus.

Balbeisi has three new concepts in the works: a coffeehouse on the bottom floor of the Gordon Square building, an Italian-American restaurant in the former AboutFaces modeling studio at 423 Jefferson St. and a Mexican concept at an undisclosed location.

Two years ago Balbeisi expanded his popular Greek and Lebanese eatery, Zeus, to Jefferson Street, where it's been well-received. He cites DDA's ongoing diversification efforts, along with the vibrant business community and loyal patrons, as the impetus for his upcoming investment in the downtown area.

Balbeisi plans to open Barnie's, a coffee house concept based in Orlando, Fla. "We're spending a lot of money on the courtyard. It's going to be a step up from a coffee shop; it's new to Lafayette," he says. Also, the floor plan and design of Balbeisi's new Italian restaurant, Trynd, are in the final stages, and he is interviewing chefs. The restaurant will offer Italian and American dishes, with an emphasis on daily chef specials ' what Balbeisi will call the "trend" or "Trynd" of the day. "I kind of tweaked the spelling," he says.

Both Barnie's and Trynd should open in mid-January, about the time Balbeisi hopes to launch his Mexican restaurant. "That I cannot disclose right now because I have not closed [the deal]. I am 99 percent, but there's always 1 percent," he says.

And should Balbeisi (or any downtowners) run out of staples like ketchup and bread, emergency supplies will soon be available at Frankie's Convenience Store at 427 Jefferson St. Frankie Burger owner Faramarz "Frankie" Yaghobi is renovating the former tattoo shop into a small store, where he'll also offer a deli (though he'll still be grilling his famous burgers off-site Thursday-Saturday). Seating will be offered in the patio area behind the space, which has a water fountain. "It's an old French-style, Bourbon Street type patio," says J.T. Hamid, who will manage the business.

Tsunami Sushi's owners are opening a smoke-free piano bar ' which they are calling "Lounge." ' in the front of the former Club 410 building next to their restaurant. The back portion of the structure will eventually be converted into a mixed use condo development with retail on the bottom floor, a project that may help Jennifer Grand land on her feet after being booted out of the space above nightclub Rain by landlord Kathy Ashworth. Grand Contemporary art gallery is in final lease negotiations for a 2,000-square-foot spot, one of several being carved out of the rectangular lower level space. "My front door is going to be on Buchanan," says Grand, but art patrons will have access from Jefferson Street during events like ArtWalk.

At the corner of Garfield and Jefferson streets, Simply Fondue is finalizing the design of its fondue restaurant, and the former Jules Downtown, next to City Newsstand, has been renovated into the V Bar, an "ultralounge" and dance club serving martinis and exotic vodkas.

Moving toward Johnston Street, boutique hotel The Juliet is well under way at the corner of Jefferson and Lee streets, with an opening scheduled for January. The hotel will offer commercial/retail lease space on its bottom floor. Less than a block from The Juliet, Furniture on Consignment is tentatively scheduled to open Nov. 24 in the old Bell's Sporting Goods location.

Off the beaten Jefferson Street path, at the corner of St. John and Convent streets, intern architect/general contractor Greg Walls is joining Tsunami's owners and Cecil Trahan's Parkview Towers, planned for the vacant lot near City Newsstand, in the mixed use arena. Sensitive to creating a development that will have its own sense of community and still be a good fit for its neighborhood, Walls is designing a project that will have a variety of residential units with retail/service spaces on the ground floor. Construction won't likely begin for another couple of years, Walls says.

"We've always had the diversification in terms of mixed use horizontally," Webre says, "but we're hoping to see that vertical mix of uses."

DDA has long championed the position that variety is the critical ingredient for creating a live-work environment in the heart of the city, and if developers can bring this handful of mixed-use projects to fruition, they'll make great strides in creating a place more people will want to call home.