Darla Montgomery's switch to TV10 is about respect and money ' lots of it. 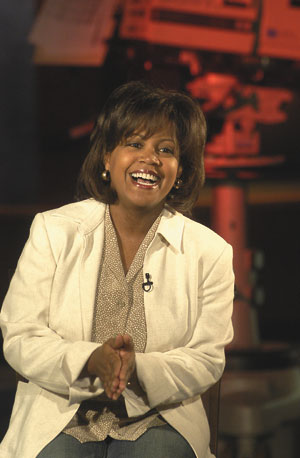 Darla Montgomery has raised the bar in local TV. At 43, the petite African-American news veteran, who still looks like she's barely 30, has commanded a salary higher than any female news anchor before her.

When Andrew Shenkan took over the reins at KATC-TV3 from General Manager Nannette Frye in January, he stepped into a proven news format. For the past several years, the station's prime-time news has been gaining ground on its closest competitor, KLFY-TV10. In some key time slots and demos, KATC's been winning the ratings war outright for the first time in history. Thanks to his predecessor's business savvy and recruiting skills, that success was largely due to a dream-team evening lineup in Sports Director Scott Brazda and anchors Montgomery, Hoyt Harris and meteorologist Rob Perillo ' the latter three former faces from local CBS affiliate KLFY.

It has been widely speculated that both Harris and Perillo, the only talent directly recruited from KLFY, were courted with high salaries less than a year after Montgomery joined the station.

For Shenkan, however, the transfer from a sister station in Lexington, Ky., to Lafayette's ABC affiliate came with a challenge ' a bidding war already under way to keep the homegrown Montgomery from jumping ship. A Tulane grad who worked as sales manager at Baton Rouge's WBRZ from 1994-2002, Shenkan got a heavy dose of the competitive spirit between his new station and KLFY ' a negotiation that ended with the CBS affiliate turning the tables on KATC's Perillo tactic by snagging Montgomery with a fat salary.

An Opelousas native whose name recognition is off the charts, the popular evening anchor returned to KLFY's airwaves Monday. Sources close to Montgomery say she's making a six-figure salary, in the range of $100,000 annually.

Montgomery says she will co-anchor the 6 p.m. and 10 p.m. newscasts, just as she did at KATC, though TV10 General Manager Mike Barras last week would only confirm that she'll be on at 10. He says she'll be "anchoring all over." Along with longtime newscaster Chuck Huebner, TV10 veteran Blue Rolfes has been on at 6 p.m., and Val Wilson at 10 p.m. Barras says Wilson is leaving the station.

KATC has not yet named a permanent replacement for Montgomery. "We are going to be very methodical," says Shenkan. "We will look both in-house and nationwide."

Montgomery was not satisfied with her salary at KATC ' specifically that she was paid less than Harris, her co-host. "The trend has been, across the country in smaller markets, that talent has been underpaid. Historically, males have fared well above their female counterparts," she says.

Shenkan, however, disagrees with that assessment, noting in part that Harris did three shows to Montgomery's two. "It really depends on the amount of experience and tenure a person has over another," he insists. "There is no gender disparity when you approach a contract. It doesn't exist in my mind."

While she confirms that KLFY did approach her with an attractive offer, Montgomery would not discuss specifics. "Their offer and their interest speak for itself," she says. "I love news, and I just want to do the news, and I want to be compensated for my abilities."

Montgomery says KATC did counter the initial offer, which KLFY answered. When she returned to KATC with word of the new tender, station officials Shenkan and News Director James Warner showed her the door, a harsh but rather common practice in the news business when an employee leaves to join a competitor.

Both KATC and KLFY officials decline to discuss compensation issues, though Barras acknowledges that anchors with strong name recognition are able to command higher salaries than in the past. "Localism is a highly sought-after part of the newscast," he says.

If the salary speculation is accurate, Montgomery has come a long way in a short time. She left KLFY three years ago ' after a decade at the station ' for a $40,000 local public relations position with the state's technical college system, which she says was a step up in pay from her job as a reporter and 10 p.m. anchor, the most highly coveted position in local news. "Six months into that position, I got a call from TV3 stating Deborah Terribile was leaving, and they were interested in replacing her," Montgomery says.

Montgomery's contract at KATC expired last Friday; she had been working as a "free-agent" because the law governing the non-compete stipulation in her contract was deemed unconstitutional. (TV10 was well aware of her status because of its unsuccessful legal attempt to enforce the non-compete in Perillo's contract.) The law has since changed, making it tougher for employees to break these clauses.

Montgomery can take some of the credit for KATC's recent success in the Nielsen ratings. In February of last year, the ABC affiliate took the lead in the eight-parish market at both 5 p.m. and 6 p.m. At 10 p.m., though it's been losing ground, perennial frontrunner KLFY has held on. The February 2006 Nielsen numbers will be released in late March.

Jim Serra, general manager of KPLC-TV7 in Lake Charles, believes market research has clearly revealed Montgomery is worth the higher salary. However, he cautions against betting on a single personality and insists both stations' news content is more likely to drive their success. "The person who's incredibly popular right now might not be incredibly popular later," Serra says. "I stop short of saying one individual can make or break a station's fortunes."