In its competition with Cox Communications, EATEL launches an advertising salvo that alerts local Cox customers to a discount pricing plan the cable company has kept quiet in Lafayette. Two full-page ads in Sunday’s Daily Advertiser tout a special new promotional offer from Cox Communications — digital cable with HBO, preferred high speed Internet and digital phone service, all for only $75 a month. A banner headline reads: “Notice: This is a message from EATEL: Cox has a special pricing plan you may not know about.” 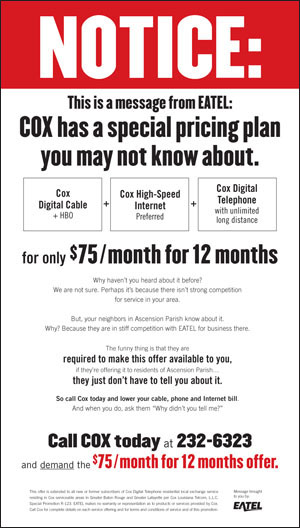 The ad goes on to say that Cox has been aggressively promoting this plan only in Ascension Parish, where it is facing stiff competition from EATEL.

“The funny thing is,” the ad continues, “they are required to make this offer available to you if they’re offering it to residents of Ascension Parish… they just don’t have to tell you about it. So call Cox today and lower your cable, phone and Internet bill. And when you do, ask them ‘Why didn’t you tell me?’”

I decide to follow EATEL’s suggestion. As a Cox customer, I am curious to see if I am eligible for the promotion. The $75 deal is half the cost of Cox’s $150 regular price for the same services — and not much more than the $50 a month I’m currently shelling out for basic service. On Monday morning, I call Cox and say I am inquiring about the deal advertised in the Sunday edition of the daily’s paper.

“Actually, that ad was put out by another company,” the customer sales rep tells me. “That wasn’t put out by us.”

When I ask if they are in fact offering this deal, he responds: “We are, but it’s only for our Ascension Parish customers, and it’s pretty much for brand new customers. But we actually didn’t put out that ad. Eatel put that ad out.”

When I ask again if I can get the deal, the salesman responds: “I have to apologize — no, sir.” The rep says I can purchase the same package at the promotional price of $125, down from the $150 regular price. (Cox has been advertising locally for an $85 a month phone, cable and Internet package, but it does not include digital cable or HBO.)

By law, Cox is required to offer all of its customers within the greater Lafayette and Baton Rouge service area the same promotional deals. In order to guard against predatory pricing, Cox also has to file all its promotional offers with the Louisiana Public Service Commission. However, Cox is not required to advertise these promotions throughout the entire region.

Eatel’s Communications Manager Trae Russell says that it appears as if Cox is only offering the $75 package to customers outside of Ascension Parish if customers reference the specific Public Service Commission filing — “Special Promotion R-123” — when they call.

“That’s like the magic words,” Russell says. “That’s the only way you’re going to get any response back from them. In other words, you have to let them know that you know what you’re talking about. You’ve got to demand it.” He adds that some customers in Baton Rouge have also been told they were ineligible for the promotion, then got a call back days later from a Cox rep who apologized and told them they were eligible for the deal.

So I call Cox again, and when the same customer service rep I had talked to earlier answered, I tell him I’m calling about “special promotion R-123.”

This time it’s a different story. Not only does he offer to sell me the promotional deal EATEL references in its ad, but when I ask if I can just get the expanded cable service — 85 channels more than my current service — and Internet, without the phone service, he offers it to me for $73.51 a month, tax included. The $75 deal, with phone service, would actually come out to $88 a month after tax, he says. This was still significantly less than the $125 deal I was offered just 30 minutes earlier.

Because the EATEL ad indicates the promotion is for a 12-month deal, I ask if I’ll have to sign a contract. “No sir, we don’t do contracts,” the rep tells me. “To be honest with you, that’s an ad that EATEL put in, kind of being dirty. But it’s no problem. They kind of put a couple of false things in there, but it’s no big deal.”

I tell him I want to mull over the prices.

Later that morning, I speak with Brad Supple, EATEL’s sales and marketing director. Supple says EATEL, a phone service provider for more than 70 years, has been competing against Cox in the cable business for three years. In 2005 it completed a fiber-to-the-home network in Ascension and lower Livingston parishes and began offering high-speed Internet and cable.

“We give [Cox] pretty stiff competition,” Supple says. “Cox has some aggressive promotional prices in an area that they have competition. The promotions are available in Baton Rouge and Lafayette; they just chose not to tell anybody about it. We just don’t think that’s the right way to do business. At EATEL, we offer the same competitive price to all of our customers in our entire service area — and we tell all our customers about it.”

Supple notes that Cox has been offering special promotions, but that the $75 package — which Cox began advertising in Ascension in January — is “the most aggressive offer we’ve seen.” EATEL’s regular price for a similar package is around $150.

Supple says Cox’s bargain prices haven’t significantly slowed EATEL’s sales or caused many of its customers to switch providers. But Supple says it was time for EATEL to respond. “At some point we had to take a step,” he says. “We weren’t going to wait until after, or until the offers get so out of hand. It’s time to let everyone know.”

EATEL also plans to run radio ads in Lafayette this week. Supple says the company hasn’t run similar advertising in Baton Rouge, because of the expenses involved. “We started in Lafayette,” he says. “This is the first time we’ve done this. We’ve been aggressive and done something out of market. You know it’s not stopping Cox from doing this again, but hopefully if and when they choose to do so again, they need to be comfortable that their customers in other markets may know about it. You can’t just hide it in Ascension Parish anymore.

“It’s nothing illegal that Cox is doing,” Supple adds. “What they’re doing is not against the law, and our recourse is just to let people know about it. Because we feel that if it was profitable, and a good promotion for Cox, then our question was, why not offer it to everybody?”

Cox Vice President of Public Affairs Sharon Kleinpeter could not be reached for comment by press time.