Johnson’s Bike Shop hangs up its wheels after 55 years of old-fashioned sales and service. 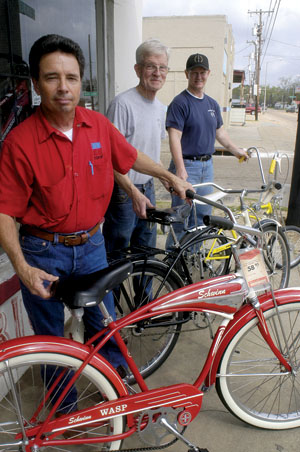 For his sixth birthday in 1958, Al Ducote’s grandfather bought him a bright red and chrome Schwinn Wasp from Johnson’s Bicycles. They lived in the neighborhood, two blocks from the shop on Simcoe. “He walked me over here, we bought it, and I’ve been riding it ever since,” Ducote says, wheeling the bike recently restored to its fire engine red glory into the small shop. “I came as soon as I heard,” Ducote says, his voice beginning to break. “Some things mean a lot to you. For me, it’s old shotguns and old bikes.”

The hand written sign taped on the window says it all: Johnson’s bike shop is closing its doors after 55 years of business. “I’ve been working so long,” says Ray Johnson. “I’m just ready to look for new opportunities.” Adds Ray’s brother Johnny, “We’re burned out. I’m ready to move on.”

Ray Johnson Sr. started the small bike shop in Lafayette in 1953. He built his business on two things: the quality of American-made Schwinn bikes and the friendly repair service he offered his customers. His older son Ray (now 66 years old) pitched in after school and came on full time in 1961. Johnny, 48, says he started getting a pay check in 1974. The brothers took over the business in 1984 and have continued their father’s tradition of service for the life of the bikes they sell. Ray Johnson Sr. passed away in 2001.

“In those days,” Ducote remembers, “there were a lot of people living in the neighborhood who couldn’t afford a car or a truck. But they could afford $58.95.” That was the price of Ducote’s Wasp, and he still has the original sales tag to prove it. “Mr. Johnson would let people pay $20 a month on their bikes. Even though this neighborhood has a reputation for being rough, people treated Mr. Johnson with respect.”

Ducote can testify to the old-fashioned business model the brothers have maintained. His 50-year-old bike was restored by Ray. “When Ray took over the shop, I was one of the first ones to go upstairs with a flashlight,” Ducote says. “Mr. Johnson kept everything. There were old coaster brakes from the 1950s, all kinds of parts up there. We were able to use the brakes to restore my bike.”

Even though he’s closing shop, Ray says he’ll continue restoring bikes with his friend Ducote. “It’s all I’ve ever worked,” adds Ray. “The only thing I know is the bike business.”

Johnson’s Bike Shop will close its doors on March 31.