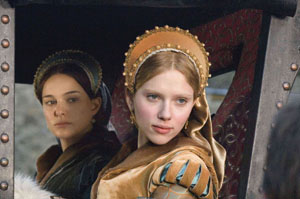 Before the purifying fire and fury of the Virgin Queen, there was the cool cunning of Anne Boleyn. Elizabeth became the unlikely candidate of righteous change, a transitional monarch who mastered the art of kingdom craft and wielded the power of a throne that was hers alone. She got that chance, however, in no small part thanks to the old ways of her mother Anne, the consort-of-a-king-turned-queen who parlayed passion and political determination into a place in history. Anne ascended by force of will, if only for a moment, her victory and victimization one in the same.

The complexities of Elizabeth’s character and her court are magnificently rendered in the lavish 1998 and 2007 pictures of Shekhar Kapur. There is nothing simple — or oversimplified — about the Indian director’s visions of Elizabeth (as played by Cate Blanchett and penned by Michael Hirst and William Nicholson). She is fragile and fierce, a queen who changed the concept of the British crown. The two films are stunning explorations of statesmanship and the necessary hagiography of the royal. Unfortunately, director Justin Chadwick’s The Other Boleyn Girl, a look at Elizabeth’s machinating mother Anne and her in-the-shadows sister Mary, cannot compete

The Other Boleyn Girl is based on the Philippa Gregory book of the same name and bandies about much of its same questionable history. At least the Anne and Mary of the print version were slightly more nuanced; their film incarnations, disappointingly scripted by The Queen’s Peter Morgan, split along that time-honored black hole of nuance that tends to haunt discussions of women of power, the madonna/whore duality

Mary (Scarlett Johansson), in Gregory’s imaginings the younger of the Boleyn siblings, guards the faded family’s lone shred of morality. An enticing mixture of ethereal beauty and earthy piety, she loves the simple and pastoral life she leads with her frayed-edge family, but she’s just about the only one. Daddy (Mark Rylance) is a climber and sees his beautiful daughters as pawns to advance the family’s fortunes; his partner in pimping is the girls’ uncle, The Duke of Norfolk (David Morrissey), who is an advisor to heir-hungry King Henry (Eric Bana) and as such is privy to the royal wandering eye. Mummy Boleyn (Kristin Scott Thomas, back from wherever she so sadly disappeared to so long ago) protests from the margins, but she’s overruled, and saucy eldest daughter Anne (Natalie Portman) is placed on a silver platter when Henry visits for a hunting party

Trouble is, Henry takes a disliking to the flirtatious Anne, preferring Mary’s maternal honesty. No monogamist, faithful only to the idea of producing a male heir, Henry ultimately leaves the door open for a scheming Anne to take back what she considered rightfully hers in the first place. And thus a sibling rivalry ignites that does considerably more than divide a family — it ultimately separates England from the Catholic Church (not to mention Anne’s pretty head from her body).

Even though the story line of The Other Boleyn Girl constricts Johansson to apple-cheeked rectitude and Portman to scheming bitchery (and eventually insane desperation), the two actresses manage to make a soap-opera-symphony of their one-note performances.

Johansson’s usual rigidity softens nicely to match the aura that Chadwick’s direction creates around her, and Portman dredges up her V for Vendetta intensity, relegating her stiff-as-a-board Star Wars performances to a long, long time ago in a galaxy far, far away. Bana sadly is not their equal. His Henry is written as a willful skirt-chasing child, a characterization that proves as barren as the wives and lovers he continually discards. The brawny talent, so promising in heavy dramas like Black Hawk Down and Munich, struggles to break free.

Chadwick’s camera loves the coldness of cavernous drawing rooms and the material trappings of the royal court. When the action moves outside, though, shots start to get muddy, creating an uneven overall look that cheapens the film. All the fun, then, is in the often outlandish performances that bring to life Gregory’s often-outlandish history. And that means that The Other Boleyn Girl never comes close to achieving the richness of a quality historical drama. It’s more like an episode of The Hills, only with more voluminous dresses and hints of incest and treason.