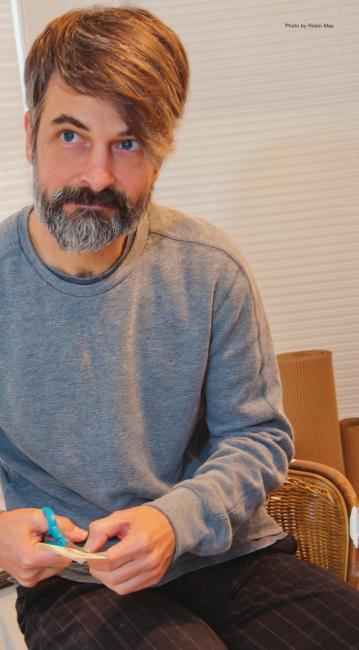 Have you ever met someone who inspired you — whose story you follow as though fervently reading chapters of a novel? Where the end of one chapter leaves you waiting for the beginning of the next?

I spent a couple of hours with Troy Dugas, learning how he evolved into the artist he is today and maybe even capturing a glimpse at the trajectory his artwork is soaring toward; I left his home studio inspired.

Dugas is an Acadiana local. He was born in Rayne and grew up in Duson, attended Acadiana High School, UL Lafayette for a BFA, and took an MFA from Pratt in New York City. He and his partner, artist/teacher Ralph Bourque, enjoyed a successful lifestyle living just south of Manhattan, at the edge of Brooklyn. Their apartment, facing Manhattan, was within eyeshot of the World Trade Center; Dugas witnessed the second airplane approach and collide into the second tower. “Passing under the Hudson River on the subway, all the lights went out and the train just stopped. It was truly terrifying; we realized something had changed about how we felt living in New York.”

Four months later, the couple returned to Lafayette.
Dugas established himself in his field while in NYC, working as a lead designer in television. Returning to Lafayette, something amazing took shape, and his identity as an artist evolved. “When I was younger, I’d see someone in the position I’m in — working as an artist — and I wouldn’t have understood the hard work that it takes to be an artist,” he says, adding that “it takes more than just [wanting] to be an artist,” and teaching art in the Lafayette Parish School System’s Talented Program while making art of his own has been good for him, bringing in an income and keeping him actively engaged in design.

I noticed that Dugas is a collector, and he’s got an amazing appreciation of order. I joked that my elder daughter is an artist, though she hasn’t realized it yet. She is a collector, but at 10 years old, she’s still learning how to store her finds. Dugas has made even collecting labels an art form. He has pristine bins of labels lining shelves from floor to ceiling like a modern library. There must be hundreds of bundles, trimmed and fastened; hundreds of thousands of labels that are neatly bound, sealed and stored in transparent containers, queued for the next commission. Dugas considers his clients stewards of his artwork. He creates pieces that satisfy the patrons’ aesthetic, yet each work is born of his own vision and conceit as an artist.

There is a large 40-inch-by-114-inch piece in progress hanging in his studio that Dugas explains is for the Chicago Athletic Association. Being part Chicagoan and familiar with this historic, esteemed club — imagine: an exclusive men’s-only establishment in downtown Chicago that dates back to the 19th century, blocks from the Chicago Exchange, nestled among the high rises, all those fine Italian suits and wooden heeled wing-tipped oxfords throughout the ages that graced the club — I notice Dugas’ piece is assembled with hundreds of cigar labels, formed in the club’s logo. This work is high art and beautiful assemblage, but it is also work that reflects the environment where it is hung.

The assemblage made for Festival International de Louisiane, Radial Forms Four #4, was created with the same considerations. Dugas gave a great deal of thought about the piece, and he treated it as a professional, commissioned opportunity. He meticulously aligned hundreds of slivers of labels that illustrate the Festival’s French influence and of course the culture of Acadiana into a large 60-inch-by-60-inch composition that maintains the integrity and style we’ve come to recognize and love as that of Troy Dugas.

Dugas expresses an immense respect for the galleries that represent him, Arthur Rogers Gallery, the Barbara Archer Gallery and McMurtrey Gallery. The beloved, late Elemore Morgan Jr. was contacted by the Arthur Roger Gallery, which inquired about Dugas after a group show at the Acadiana Center for the Arts. Dugas attributes his success as a working artist/teacher to a lot of hard work on his part, but recognizes these relationships continue to play an important role in his art making.

Before we parted ways, we gabbed a little about tricks of the trade, some new and some old, and we talked a little shop about painting exercises for students. Somehow, we end up talking about trust: trusting materials, trusting the process of making an assemblage, trusting the buyers’ care and preservation of the pieces, trusting his representation, and of course the kind of trust found in his 20-year relationship with Bourque.
“What keeps me going is trust,” Dugas says. “Trust and consistency.”