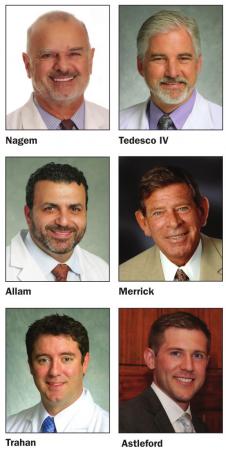 Dr. Edmund Nagem Jr., a cardiothoracic surgeon who left Lafayette in 2008 for semi-retirement and has been temporarily filling in for other physicians out of state and in West Monroe, returned to the Hub City to resume a full-time practice in December. Nagem signed a multi-year contract with Lourdes Physician Group to treat patients at Our Lady of Lourdes and its partner facility, Heart Hospital of Lafayette, which Nagem co-founded in 2004. Lourdes bought a majority interest in the specialty hospital in 2007. Nagem, whose specialties are cardiac, thoracic and vascular surgeries, is board certified in general surgery and thoracic cardiovascular surgery. He has opened an office in Province Office Park across from Lourdes and did his first case at Heart Hospital Dec. 17.

Lafayette General Health announced that Drs. Victor Tedesco IV and Mohamad Allam, both local cardiovascular and thoracic surgeons, have joined Lafayette General’s physicians group, Lafayette General Medical Doctors, which has a partnership with CIS. The two surgeons, whose offices are also in Province Office Park, currently have hospital privileges at HH, OLOL and LGMC, he adds. Both surgeons are veterans in their field, from performing minimally invasive heart valve and open heart surgeries to those procedures involving thoracic oncology.

Largely due to his generosity in 2014, Latter & Blum CEO Robert Merrick was named New Orleanian of the Year by Gambit, an honor equally deserving in these parts. (Latter & Blum owns Van Eaton & Romero.) Merrick’s philanthropic work in 2014 extended into Acadiana in a big way last year, including a Ruth Fertel Foundation $25,000 donation he directed to the B. I. Moody College of Business right after making a personal donation of $60,000 to the Moody college. Additionally, with his approval, Van Eaton & Romero committed to $60,000 over five years to sponsor the college of business sales lab. In 2014 he approved donations to the following local organizations through VER: Acadiana Center for the Arts, Acadiana Symphony Orchestra, PASA, Miles Perrett, March of Dimes, American Heart Association, St. Jude and Academy of the Sacred Heart.

Dr. Max Trahan, who specializes in minimally invasive approaches to surgery, has opened a general surgery office in Crowley. Trahan returns to the community after being named Crowley’s 1997 Outstanding Young Citizen of the Year. Trahan has expertise in voice preservation monitoring during thyroid and parathyroid surgery (recurrent laryngeal nerve monitoring). He also has experience with general abdominal robotic assisted surgery and laparoscopic surgery on hernias, bowels and solid organs. After earning his bachelor’s degree in microbiology at LSU, Trahan earned a master of public health degree at St. George’s University. He also obtained his doctor of medicine, cum laude, from St. George’s. Before coming to Acadia General, which is managed by Lafayette General Health, Trahan was a house officer at Tulane University Medical Center in New Orleans, where he completed his surgical residency. Trahan is certified by the U.S. Centers for Disease Control and Prevention for Chemical Terrorism Preparedness, and has served as an instructor in advanced trauma and cardiac life support.

Our Lady of Lourdes has received the Get With The Guidelines-Stroke Gold- Plus Quality Achievement Award for implementing specific quality improvement measures outlined by the American Heart Association/American Stroke Association for the treatment of stroke patients. Lourdes is the only hospital in Acadiana that received this recognition and has earned it four years in a row.