Lafayette’s arts organizations and the Kennedy Center team up to design an arts program for Louisiana’s public schools. 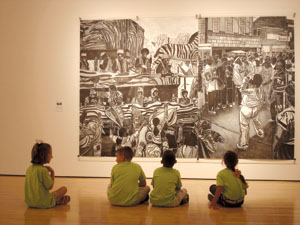 Sandy Labry was sitting in the John F. Kennedy Center for the Performing Arts in Washington, D.C., at a February 2008 meeting of the nation’s Partners in Education when Kennedy Center President Michael Kaiser singled her out. Kaiser explained that in his last three years as director he intended to focus on working with one community and leveraging the resources of the Kennedy Center to provide a meaningful arts experience for every child. Then he announced that Lafayette had been selected as the partner.

Labry, who represents the Lafayette Parish School System as a Kennedy Center team member, was surprised by the announcement. “We didn’t know he was going to make public the project we were working on,” she says.

In 2007, the Louisiana Legislature passed Louisiana Act 175 to bring visual and performing arts into every classroom in Louisiana by 2012. Working with the Kennedy Center, Lafayette’s arts community hopes to develop a working model for the state to adopt in implementing the new law.

During last year’s legislative session, Baton Rouge Sen. Sharon Broome authored legislation requiring the Board of Elementary and Secondary Education to develop and implement an arts curriculum in the public schools. Broome worked closely with Lt. Gov. Mitch Landrieu, who has pledged to integrate eroding arts programs back into education. “Unlike other states, every child in Louisiana doesn’t have that opportunity for arts education, which compelled us to create the legislation and champion its passage,” says Pam Breaux, an assistant secretary within the state Department of Culture, Recreation and Tourism.

“We want to put music and the arts back in schools,” Breaux says. “Research tells us that when children are exposed to the arts, dropout rates go down, test scores go up, and science skills improve. And so it’s important for education because it ignites creative thinking and critical thinking, and it makes better students.”

Breaux says statistics indicate that when education is infused with the arts, there’s an overall increase in academic performance for students from all socio-economic backgrounds. Studies show the arts can help students develop crucial problem solving and critical thinking skills. “Students exposed to the arts for three hours per week outperform their peers on the SAT,” Breaux says. “Four years of arts education yield 59 plus points higher on the verbal portion and 44 plus points higher on the math portion of the test.” Breaux also notes that art in education also tends to reduce dropout rates, deter delinquent behavior, increase aptitude in reading and math and promote better behavior.

Already under way, the ambitious Lafayette endeavor stretches out over five years. This year is devoted to writing curriculum guides, next year to training the teachers, and the following year to piloting the program in selected schools. By 2010 a state-wide implementation of the curriculum will begin in all public schools.

Once the arts act passed last spring, Kaiser and his team from Washington came to Acadiana. “The Kennedy Center is the nation’s center for the performing arts,” explains Ramien Pierre, education department administrator for the center. “Michael wanted to do something that is not only good work but very practical. So at the invitation of the lieutenant governor, we looked at where in Louisiana we might do a successful project, and we’ve had the partnership with the Lafayette Parish schools, the arts council, and the university for 14 years. There are other partnerships in Baton Rouge and New Orleans, but the Lafayette partnership is one of the longest we’ve ever had where the original team members are still there. We thought, if it’s going to work any place, it’s going to work in Lafayette.”

Since 1993, Labry, along with the Acadiana Arts Council’s Rene Roberts and UL Lafayette’s Hector Lasala, has been traveling to Washington and learning cutting edge arts-in-education strategies. The team has developed programs in Lafayette, among which is an artists-in-residence program that partners artists with teachers to bring innovative learning experiences to students by coordinating arts activities with classroom lessons. In 2004 the team received the Governor’s Arts Award for its work in arts education. “What we’ve been doing with the Kennedy Center for the past 14 years has really been working up to this,” Roberts says.

The first step in the plan is to catalogue what each of Lafayette’s arts organizations is doing for arts education. Along with the AAC, groups like  PASA, the Acadiana Symphony, Cité Des Arts, Chorale Acadienne, Lafayette Ballet, Acting Up and the UL Art Museum all have programs that intersect with the public school system. But there’s no central clearinghouse for providing arts education in Lafayette Parish’s schools. To solve this problem, the Kennedy Center has established what it calls an arts audit and is asking Lafayette residents to participate. Pierre says the purpose is to figure out what is actually going on in schools with art education and what people think is going on.

“Then the fun begins,” says Pierre. “The university has volunteered to crunch the numbers from the audit to make sense of all the data. Once we have a sense of what’s really going on, it becomes a planning process, and we know ultimately what has to happen in terms of coverage, by the 2010-2011 school year.”

The real work begins after determining Lafayette’s needs for quality arts education, Pierre says. “We’re relying on local expertise on how to get people and organizations to work together,” he says. “We’ve intentionally tried not to get ideas down on paper yet. We want to look open-mindedly at the data as it comes in. We’re committed to go forward into the darkness.”

Breaux notes that the state’s CRT office will closely monitor Lafayette’s progress. “The Kennedy Center sees this as a national model,” she says. “We are certainly looking at this as a model for community engagement in arts and education. Our eyes are wide open. We’ll be very interested in sharing in the good work that will come out of Lafayette with other communities in Louisiana.”

For more information about the arts audit, the board member seminar, and arts-in-education programs in Lafayette, contact the Acadiana Arts Council at (337) 233-7060 or online at www.acadianaartscouncil.org/audit.