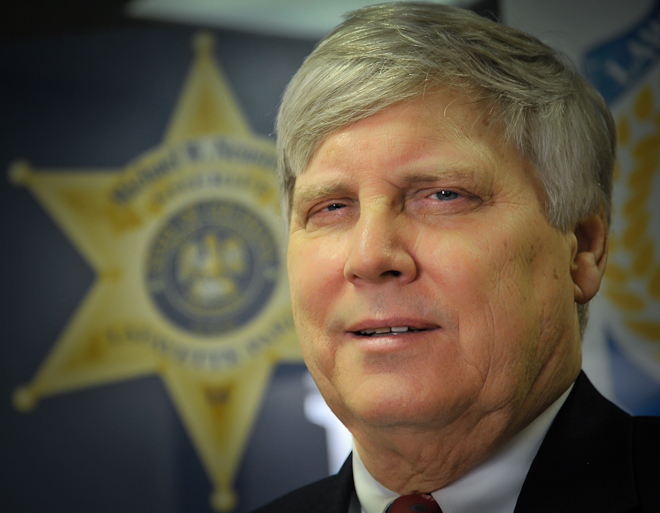 With the dust barely settled since Mike Neustrom went public with news this would be his last term as sheriff, it didn’t take long for a cast of candidates to start lining up to take the job.

We’ve already heard about Lafayette Police Chief Jim Craft’s interest in the job, which came less than 24 hours after Neustrom’s Jan. 5 announcement, telling The Daily Advertiser that a run for sheriff is “definitely something to think about.”

While Craft is still mulling a potential run, that’s not the case for Rick Chargois, a 25-year veteran of Louisiana State Police, who has made his intentions to seek the office very clear. The same can be said of Chad Leger, a fellow police chief who heads the Scott Police Department. Leger is slated to make his bid for sheriff official at an event Wednesday morning.

Some may also remember Leger as a recent inductee in our annual “Pooyie” edition of IND Monthly — a 12-month roundup of the last year’s biggest happenings, complete with a timeline featuring the craziest antics and the biggest “couillons” of the year.

And included among our picks for the biggest “couillons” of 2014 was none other than our soon-to-be sheriff’s candidate, Chief Leger, for a series of racially insensitive social media comments posted on his Facebook account in October. Featured alongside fellow 2014 inductees like failed school board candidate and self-professed homophobe/racist “Coach Don” Gagnard, as well as failed congressional candidate Lenar Whitney of the “GLOBAL WARMING IS A HOAX” fame, here’s Leger’s 2014 “couillon” profile (circled in red): 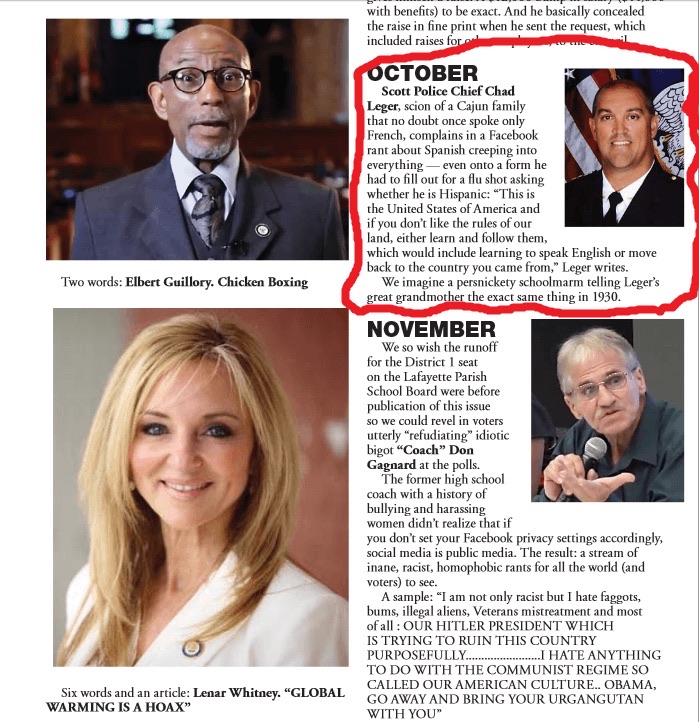 But despite all the heat from the racially-insensitive comments — aside from us here at The IND, it really wasn’t that much heat — Leger isn’t letting it put a stop on his political aspirations and wasted no time at all in letting the public know he wants to be sheriff, releasing this statement to KPEL965.com the day after Neustrom made his announcement:

I want to congratulate Sheriff Mike Neustrom on his many years of service to Lafayette Parish. He has left a significant mark on our community. For the last month I have been reaching out to supporters about my desire to service Lafayette Parish as Sheriff. This is a day to reflect on Sheriff Neustrom’s career, so it’s not a day for politics. I plan to make a formal announcement of my plans as a candidate for Sheriff in the coming weeks.”

In the immediate wake of Neustrom’s announcement, the Advertiser also reached out to longtime sheriff’s deputy Kip Judice with questions about the coming election season. Though he’s probably still recovering from having spent much of the last year on the campaign trail running for Lafayette City Marshal — it’s been about a month since December’s runoff against Brian Pope — Judice tells the Advertiser the thought of making a bid for sheriff had yet to cross his mind.

November’s still a good 10 months off, and a lot can happen between now and then.