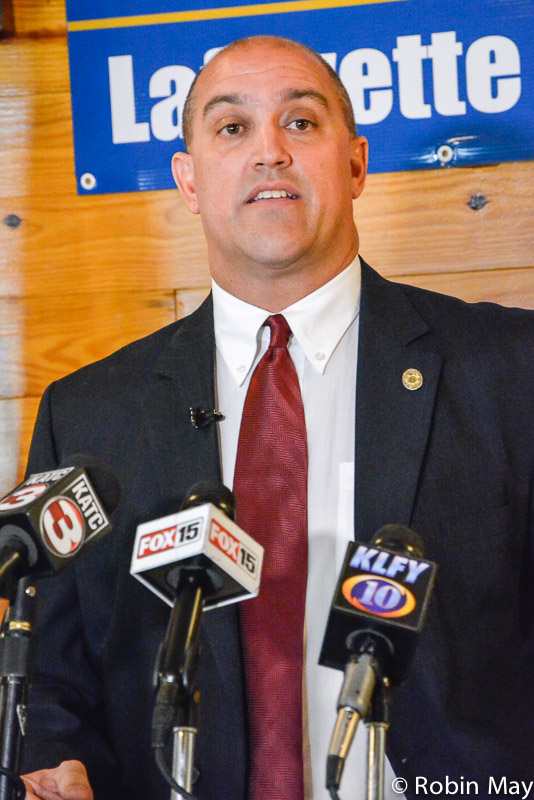 [Editor's Note: This story originally inaccurately attributed comments regarding phone calls to Chad Leger's campaign to campaign manager Joe Castille. It was Leger himself who talked about contacting potential supporters, which led others to call him wanting to know more about his candidacy.]

The amount a candidate receives in donations is typically a good indicator of how things will pan out come election day, so for Scott Police Chief Chad Leger, having a campaign war chest that's already nearing the $200,000 mark could mean he'll be one of the big contenders in the coming race for sheriff of Lafayette Parish.

Leger has had his eye on October's sheriff's election for several months now, but waited for the announcement from longtime Sheriff Mike Neustrom that he wouldn't be seeking re-election before making his bid official.

Yet, Leger says because he had been contacting potential supporters, word was spreading, and calls started coming in from people wanting to know more. So did the donations. The election is still months away, but so far, Leger is sitting on a campaign fund of about $180,000. While some of that consists of donations from his previous campaigns for police chief – his November re-election was uncontested – about half consists of funds donated specifically for his run for sheriff. And, according to Leger's campaign manager, Joe Castille, a total of $94,000 in donations came just during the last three weeks of December, all for the sheriff's race.

Neustrom's announcement that this would be his last term came two weeks ago, and on Wednesday, Leger made his bid for sheriff official during a press conference at Acadian Village.

"This year, Lafayette Parish will elect a new governor, a new city-parish president and after Mike Neustrom's recent announcement, a new sheriff," Leger told the crowd during Wednesday's press conference. "I think it's a good time to elect a sheriff with a strong law enforcement background. I believe a sheriff who knows what it's like to serve in uniform and who has the experience in a range of law enforcement roles is important to ensuring that best practices are used in the field, and that both officers and the public are protected.

Leger – a 26-year law enforcement veteran who before becoming chief of the Scott PD served as a Lafayette Parish Sheriff's deputy for 14 years (1998-2002) – also thanked Sheriff Neustrom for his four terms of service.

"I'd like to thank Sheriff Neustrom for his years of service to Lafayette Parish. His work over the years resulted in the Lafayette Parish Sheriff's Office receiving national certification and accreditations. This is an important achievement and one that needs to be preserved and built upon. He has also done important work in developing alternatives to incarceration for those cases in which certain non-violent individuals can receive assistance and training allowing them to become productive members of society."

Leger also laid out some of his campaign platform Wednesday, saying his focus if elected would be increased communication between all the law enforcement agencies in the parish. Leger also says he embraces the technologically-inspired changes law enforcement is currently experiencing, pointing out that the 25 officers of the Scott PD have been wearing body-mounted cameras for well over a year now.

For more on Leger and the sheriff's race click here.