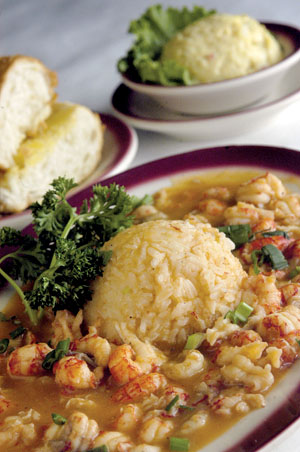 Back in 1980, when Curtis Joubert was elected mayor of Eunice, the dusty little town of 12,000 on the Cajun prairie was buckling under the oil bust. Joubert was looking for a way to cultivate other industries and hit on marketing the culture of French Louisiana. First the city bought and renovated the abandoned Liberty Theatre, now home to Saturday night’s Rendez-vous des Cajuns live radio show. In 1986, he fired up the town to create the first World Championship Crawfish Etouffée Contest. Twenty-three years later, the festival is going strong, with 40 teams competing for the title of World Champion Crawfish Etouffée Cook.

Last year, the winner in the amateur class was a wild card. Jim and Myra Brown from Sevierville, Tenn., who learned about the competition on the Internet. Unfamiliar with Louisiana chow, they didn’t even know what a crawfish looked like. Inspired, they drove down to Eunice in their RV a week before the cookoff and ate étouffée in every restaurant until they found one they liked. Then they went back to their RV kitchen and cooked batch after batch until they created what they thought was a winner. Talk about an upset.

In her years of observing, contest coordinator Jenny Moody has seen more étouffée variations than you can shake a spoon at. “Everyone has their own personal secret,” she says. “Some people use roux, some butter, cream of mushroom soup, Rotel tomatoes ... The only rule is that it’s smothered crawfish. How you want to smother it is up to you.”

At least one team of cooks from Lafayette has decided to throw their recipe into the ring of fire. Bob Carricker and Noland Theriot — aka “Dr. C” and “Coach T,” creators of the Boudin Link Web site — have been working on a competition étouffée. “Last week I made a giant batch of my base recipe, then tried five alterations,” Carricker says. “Everyone is basically cooking the same thing, so if you don’t step out, you don’t stand out.” One had bacon grease, one had cream cheese and one had a mixture of cream cheese and smoked salt. Carricker conducted a taste-off. Which one won? “That’s my secret,” he says, drawing out a long pause. “Tell everyone it’s cumin.”