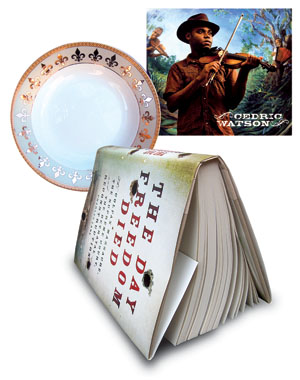 GUMBO STYLE
Vinyard House at Jefferson Street Market’s timing could not have been better. Arriving just before the weekend cool snap (that’s so far lasted into Monday) was the store’s new line of Italian porcelain gumbo bowls, trimmed and etched in gold with a beautiful fleur de lis design. Oversized and shallow, they’re a classy way to serve the downhome Louisiana favorite — or any soupy concoction for that matter. You’ll also be pleasantly surprised at the reasonable price tag: the gumbo bowls are $15.95 each. Vinyard House also offers the same pattern in dinner and dessert plates, cups, saucers and a demitasse set. Prices range from $6.95 for the dessert plate to $23.95 for the demitasse set. Call Jefferson Street Market for more info at 233-2589. — Leslie Turk
**
NOT JUST FIDDLING AROUND**
Of the 15 tracks found on Cedric Watson’s self-titled CD, he’s penned 10 of the them and arranged three of the traditional numbers. Armed with fiddle and accordion, Watson sings throughout and also covers Boozoo Chavis’ “Tee Black” and Michael Doucet’s “Cochon de Lait,” who writes of the CD, recently released on Valcour Records: “These songs may well be early brushstrokes of a life’s worth of possibilities, not only for himself, but also for the identity survival of a culture.” Watson’s joined by local musicians Jeffery Broussard, Corey Ledet, Jermaine Prejean, Chas Justus, Joel Savoy and Eric Frey. To hear samples of Cedric Watson, visit www.myspace.com/cedricwatson or catch Watson live this Friday at his CD release party at the Blue Moon Saloon in Lafayette at 8 p.m. Cedric Watson retails for $15 and can be ordered online at www.valcourrecords.com. — R. Reese Fuller
**
SUNDAY BLOODY SUNDAY**
Easter Sunday 1873 was an unprecedented day of racial violence in the small central Louisiana town of Colfax. History recorded the day’s events as a riot, and it’s only recently begun to be called a massacre. The tragedy is usually a blip in the footnotes of history textbooks, but the story was recently tackled in the novel Red River by Lalita Tademy. Now Charles Lane, the former Supreme Court staff writer for The Washington Post, explores the Colfax Massacre and its enduring scars on America’s laws and race relations in The Day Freedom Died: The Colfax Massacre, the Supreme Court, and the Betrayal of Reconstruction. Publishers Weekly writes of the book: “Lucidly written, thoroughly readable, carefully documented, and impressively coherent, Lane’s rendition of this turning point in the history of American race relations and racial politics ends a long silence in American history books.” The Day Freedom Died retails for $27 is available in Lafayette at Barnes & Noble and Books-A-Million. — RRF