A remake of the Thai photo thriller Shutter scares up a few creepy moments, but this is one picture that’s not worth very many words. Ben Shaw (Joshua Jackson) almost has a picture-perfect life. He’s just married Jane (Rachael Taylor), a blushing bride whose blonde beauty falls somewhere between classic Kim Novak and campy Anna Nicole Smith. The head-over-heels newlyweds leave their cozy New York apartment an hour after the reception ends for a working honeymoon in Tokyo; Ben’s an up-and-coming photographer whose got a big assignment there, and Jane goes along for the ride. And the wreck. 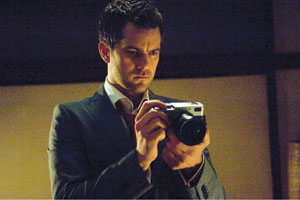 The couple has barely adjusted to the time change before they have a bizarre accident on a nighttime road. Jane’s behind the wheel, and a half-asleep Ben is consulting a confusing map. Mist swirls over the deserted road, shadows and light living in the trees all around. Suddenly, there’s a woman in the road, flesh and bone coming out of the fog. Jane can’t stop, runs over the woman, causing a disorienting skid into a thick tree trunk. Before she faints, the young wife sees the body laying in the road. When Ben and Jane rouse and extricate themselves from the wreckage, however, there is no body to be found.

Disturbed but undaunted, the Shaws try to shrug off the accident. Well, Ben does the shrugging, Jane struggles with her guilt. But with nothing else they can do — the police have searched and found nothing — they continue on their way to Tokyo, taking souvenir snapshots all the way. Ben’s job begins, a reunion with old friends and business partners Bruno (David Denman) and Adam (John Hensley) part of the bargain. The trio go way back, reminiscing over sake one night about their single-guy adventures. Bruno sets up Ben and Jane with an apartment and photo studio in an otherwise (and scary-movie-cliché-convenient) abandoned urban building.

Everything seems to be going swimmingly, until the photos start getting developed. Bursts of light and swooshes of glare obliterate the images, whether honeymoon shots in front of icy-blue mountains or Ben’s high-fashion photography. The couple blames everything they can think of — bad lighting, faulty equipment — everything except that lady they left lying in the middle of the road. But Ben’s photo assistant Seiko (Maya Hazen) knows what’s up, “spirit photos” she calls them, and she’s got a guy that Jane can see, a guy who publishes a magazine of similar photos, many with similar light patterns, many with what looks like actual ghosts appearing. The closer the young bride gets to the truth of her own freaky photos, the eerier things become. Sightings, visitations and hallucinations begin to plague Ben and Jane, whose lives become increasingly violent and unpredictable. Did they kill that woman on the road? Is this her vengeance? Or is something even scarier and more sinister in play?

Shutter, directed by Masayuki Ochiai and scripted by Luke Dawson, is based on a 2004 Thai film of the same name. No, there really wasn’t any need to remake this film, as stricter foreign film fans have said, but then again, it’s not like we were all willingly widening our horizons and watching the originals of all those other Asian horror films like The Ring and The Grudge and The Eye. The best hardcore horror fans can hope for is that American remakes will jumpstart interest in Asian originals. In the case of Shutter, purists will (and have) argued that the original is a superior scary movie, but the truth is that the differences are really only cosmetic. This newer version moves the action from Bangkok to Tokyo and shifts the focus of paranoia from the newlywed husband to the newlywed wife. Where the Thai original kept its fear factory purely inside the imagination, Ben and Jane face physical peril.

Other than that, the 2008 Shutter closely mirrors the 2004 film, right down to the film’s cool and creepy final shot. So the flaws that exist are not new developments, unless you count trading two fair-to-middling Thai actors with two fair-to-middling American actors. The story builds with the same kind of meandering momentum, only powerful when Photo Ghost decides to make its presence felt. Everything (and everyone) outside of that feels makeshift and cardboard, so much so that most of things that should be twists are telegraphed ahead of time. Under those circumstances, it’s hard for any scare to make the audience jump out of its seats when they’ve been shifting around so long just waiting for one.

Where the story goes should ultimately be no surprise; Asian horror movies have their conventions just like every other kind of horror movie. But there is one final reveal that could have been truly masterful if the filmmakers had held on to it until the final frame. Sadly, they show it to us twice. The first instance is laughably bad, the second haunting — on reflection, exactly the kind of combo close-up that Shutter deserves.