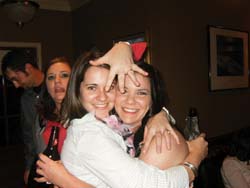 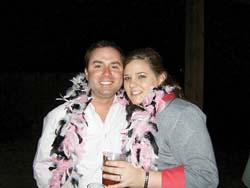 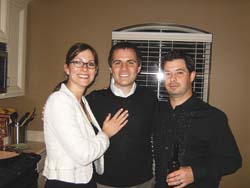 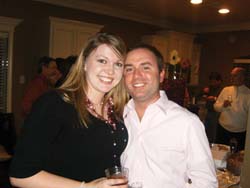 Because great parties are so much fun, people often forget that it involves an awful lot of hard work. Andrew Bellard, Kenny Ritter and Neil Faulkner were the hosts with the most when they threw a Feb. 9 engagement party for friends Erin Bellard and Craig Ashbaugh. This party started like most — a couple of cocktails, nibbles and of course casual conversations, but by the end of the party the guys were fighting for the feather boas. Who would have thought boas would be the couple’s most popular souvenir out of all of the other party favors! Erin and Craig enjoyed their engagement party immensely, especially having their closest relatives and friends around. Among the guests were Jane and Glenn Bellard (parents of the bride), Nicholas and Julie Bellard, Kevin and Jennifer Bellard, Lauren Bellard (maid of honor and sister of the bride), Robin and Chuck Langlinais, Bethany Bazare (matron of honor), Marie Morehizer (grandmother of the bride), C.J. Ashbaugh (brother of the groom and best man), Douglas Ashbaugh (father of the groom), Huey and Verna Romero, John Morehiser and Sherry and Kevin Stutes. Thanks guys, the party was a blast. Hope you don’t mind if I just attend the wedding reception, because I know that’s going to be quite the shindig!

Party Girl knows a promise should never be broken — especially when it comes to making a promise that local R&B/hip-hop sensation Cupid will be visiting your school. Students at Cathedral-Carmel were ecstatic when their principal told them if they raised more than $110,000 selling magazines, their hard work would be rewarded with an appearance by Cupid. Guess what, they did it. Congratulations, CCS! Party Girl can’t think of anything better than having my very own “Cupid Shuffle” Party. I am so jealous, but I guess being a bystander wasn’t a bad deal after all. Cupid has Party Girl’s stamp of approval after he told the kids to stay in school and get a good education, which has been the foundation of his career. Cupid also promised the parents that it was his responsibility to keep his music “clean” for the today’s kids.

In serious fashion, Pierre Vimont, France’s ambassador to the United States, made his first official visit to Louisiana on Feb. 21 and 22. Of course, I already adore anyone who comes from the land of Givenchy, Yves Saint-Laurent and Comme-des-Garçon, but I loved Vimont even more when he told Gov. Bobby Jindal and many Francophone groups that France has donated more than $20 million to Louisiana since the storms of 2005. Representing Acadiana at the event were Bernard and Francoise de Reynies, Agnes Capello, Philippe Gustin, John Hernandez III, Warren A. Perrin, Karel Roynette and Collin and Muriel Castille. 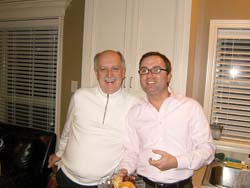 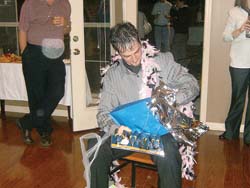 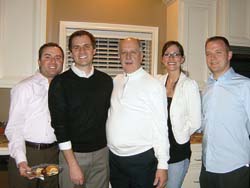 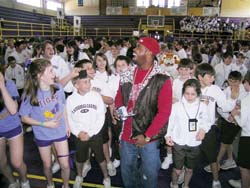 Cupid demonstrating the “Cupid Shuffle” to the CCS students 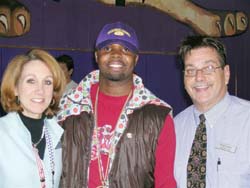 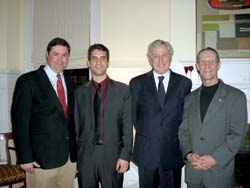 John Hernandez III, president of the Francophone section of the Louisiana Bar; Karel Roynette, French attorney and intern; Pierre Vimont, French Ambassador to the United States; and Warren A. Perrin, president of CODOFIL.