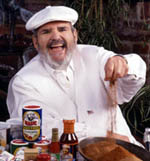 Chef Paul Prudhomme took a shootin' and kept on cookin'. The St. Landry Parish native was setting up a cooking tent at a New Orleans golf tournament on Tuesday when he felt a sting on his right arm. After shaking out his clothing, a .22 caliber bullet fell out of his shirt. A Jefferson Parish Sheriff's spokesman said Prudhomme was struck by the falling bullet and speculated that it was fired within a 1 1/2 mile radius of the golf course.  The celebrated New Orleans-based chef was unharmed and continued cooking. Read accounts from The Times-Picayune and the Associated Press.