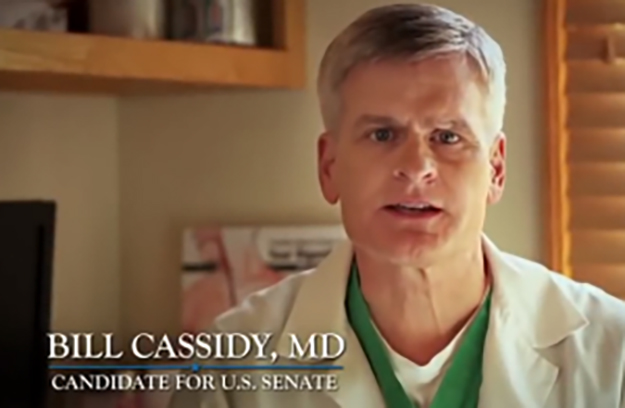 On at least 21 different occasions during the last 2.5 years, Rep. Bill Cassidy billed the Louisiana State University Health Sciences Center for work allegedly performed on the same days Congress voted on major legislation and held important committee hearings on energy and the Affordable Care Act, according to records first posted by Jason Berry of The American Zombie. Cassidy, a medical doctor, remained on LSU‘s payroll after he was first elected, despite concerns by his associates about the nature of work that Cassidy, as a member of Congress, could legitimately conduct in his capacity as an employee of LSU.

In May of 2010, Cassidy received an extensive opinion from the House Committee on Standards of Official Conduct, advising, among other things, that he could be compensated as a "teaching physician" who teaches "a regular course of instruction." The House Committee also advised Cassidy that, although he is prohibited from practicing medicine for compensation, he could still accept "payments for professional medical services in an amount that does not exceed the actual and necessary expenses associated with the medical services provided." Payments for actual and necessary expenses associated with medical services, it is worth noting, are considered on a case-by-case basis; physician members of Congress are not allowed to earn a salary for the practice of medicine.

Although the records released are incomplete, they raise serious legal and ethical questions about Cassidy‘s role at LSU and seem to suggest that Cassidy may have been in open violation of the House Committee‘s clear guidelines and may have been grossly overcompensated for his work.

Instead of taking a leave of absence from LSU after he was elected in November 2008,Cassidy agreed to an 80 percent reduction in his salary, or approximately$20,000 a year, slightly less than the $26,550 annual limitation on outside wages earned by members of Congress. There were practical reasons a physician who had been newly and narrowly elected to a Congressional seat that had already changed hands twice in the last two years would want to remain on LSU‘s payroll: In addition to his salary, LSU also paid for Cassidy‘s medical malpractice insurance, continuing education, and licensing fees, expenses that can easily total in the thousands. In the event that he lost re-election, he would be able to immediately return to his medical practice, without even skipping a beat.

According to correspondence between Cassidy and his colleagues, his new role at LSU-HSC would still require a commitment of approximately 30 hours a month in order to ensure that his compensation was proportionate to the reduction of his base salary. In an e-mail dated January30, 2009, Ronnie Smith, LSU-HSC‘s Vice Chancellor, writes, "(Cassidy‘s)effort should be documented and monitored and appropriate adjustments topercent of effort made, if needed, in a timely manner." Smith was not the only person who realized, early on, that the unusual arrangement with a sitting U.S. congressman could be problematic.

On March 25, 2009, William Livings, LSU-HSC‘s business manager, asked his colleagues to define Cassidy‘s specific duties and responsibilities. "I could make upsome semblance of what I think his duties could be," Livings writes,"but, in this case, given his status as a U.S. Congressman, I think it would be prudent from our perspective to know what it is y‘all expect from him for his one day per week (20%). Is he to provide simple clinic services, GI services, endoscopies, HIV services, etc.? What happens to his clinical trials?Is he to provide services at the private clinic? I wouldn‘t think so given that I can‘t reimburse him for those services anyway since those collections/payments would put him over the $25,000 and auditors are going to want to know exactly what it is he is doing for us (EKLMC; LSU HSC) for the$20,000 base pay we give him annually. We are going to have to spell out exactly what it is he does for us for his renumeration from us. Believe me,this scenario will be a very auditable item and I feel they will really hone in on this situation to make sure we are meeting all federal and state regulations."

Although Livings‘s concerns were legitimate, Cassidy‘s arrangement with LSU-HSC never raised concerns with auditors or the media, largely due, no doubt, to the House Committee‘s advisory opinion and approval. However, as its opinion makes clear,the House Committee had been under the impression that Cassidy was being compensated for teaching resident physicians and students. Federal law prohibits members of Congress from receiving honoraria or compensation for"speeches, articles, and appearances," without prior approval. In their letter to Cassidy, the House Committee explained the guidelines:

In order to receive approval, the individual wishing to teach must establish that:

1. The teaching is part of a regular course of instruction at an establish edacademic institution;

2. All compensation comes from the funds of the institution and none is derivedfrom federal grants or earmarked appropriations;

3. The payment is for services on an ongoing basis, not for individualpresentations or lectures;

5. The students receive credit for the course taught;

6. The compensation does not exceed that normally received by others at theinstitution for a comparable level of instruction and amount of work;

7. No official resources, including staff time, are used in connection with theteaching;

8. The teaching does not interfere with official responsibilities nor is itotherwise inconsistent with congressional duties; and

9. The employment or compensation does not represent a significant potential forconflict of interest.

Cassidy represented himself to the House Committee as an "Associate Professor of Medicine, Teaching, and Research" and had claimed that his position"involves lecturing and teaching medical residents and students as theyt reat patients, as well as supervising research projects." But more than a year before the House Committee granted approval, in an e-mail dated Jan. 29,2009, Cassidy acknowledged the concerns that his responsibilities had almost nothing to do with teaching.

"Ronnie(Smith) has been concerned in the past that the clinical activities have to involve teaching in order to justify application of the dual employment exception," Cassidy writes. "The statue, as I recall, gives exceptions to teachers and to doctors working in the Charity Hospital System. The latter exception stands alone, without reference to teaching. I have not reviewed recently but I did look at this carefully when I entered the State legislature. If necessary, I can look for (it) again. I am told that when the new North Baton Rouge Clinic building opens, that it will be possible to move hepatitis clinic to a Monday. At this time, I can staff this clinic fairly regularly and that will be teaching." Cassidy applied a Louisiana state statute that allows part-time elected officials to also work, in a full-time capacity, as physicians in the charity system, and obviously, he hoped tostretch the definition of the word "teaching" as much as possible.

Earlierin the same e-mail, Cassidy describes, exactly, what his responsibilities were."I am spending approx 5 hours to 10 hours a week on LSUHSC activity. This includes clinical activity at Angola, private practice, discussing research issues and patient care issues with my research coordinator and nurse residents, speaking to residents and taking Internet courses in research ethics required by the IRB. The latter has or will require approx 4 hours of Internet time. I must complete it in order to continue to review our ongoing studies."

The next day, Ronnie Smith wrote Cassidy back. "Based on the information below(from 5-10 hours/week which would suggest roughly 7.5 hours/week on average or the equivalent of 20% effort) that we would be talking about a reduced level of effort to 20% and a proportionate reduction in pay." On Feb. 9, less than two weeks later, LSU-HSC changed its agreement with Cassidy accordingly.

In response to a public records request, LSU recently released 16 of Cassidy‘s time sheets, dating from July 2012 to March 2014. Most of these time sheets are backdated, as if they were filed in a rush, and they reveal that Cassidy worked, on average, between 10 to 12 hours a month, far less than the 30 hours a month that his contract required. In October 2013, for example, he worked only seven hours.

Despite what he had represented to the House Committee on Standards of Official Conduct, he never taught a class; the vast majority of the very little work he apparently did for LSU-HSC is listed as "clinic." He also billed for his own continuing education hours.

Even more troubling, on at least 17 separate occasions,Cassidy‘s time sheets indicate that he spent multiple hours in LSU-HSC's clinics on the same days in which he also participated in committee meetings and roll call votes, which would have likely required him to bend the rules of space and time. On four other occasions, Cassidy billed multiple hours for"on the phone" consultation with LSU-HSC while working from Washington, D.C.

Cassidy,it‘s worth noting, finally took a leave of absence from LSU-HSC in April.Between his job in Washington, D.C., and his campaign for the U.S. Senate, he must've finally ran out of time.

This story was first appeared on cenlamar.com, an award-winning blog about Louisiana politics by Lamar White Jr. An IND contributor, White is an Alexandria native in his final year of law school, concentrating on constitutional law and public policy, at the SMU Dedman School of Law in Dallas, where he lives with his golden retriever, Lucy Ana.