When Mike Neustrom became sheriff of Lafayette Parish in 2000, he brought a scholarly approach to law enforcement, and when he retires next year, he’ll leave the office a much better place than he found it. By Patrick Flanagan 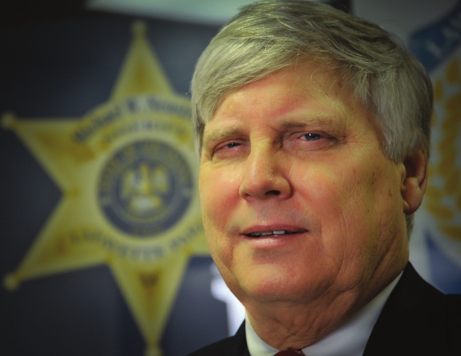 Mike Neustrom got his start in law enforcement while a student at what was then USL, serving as director of University Police between 1970 and 1974. He would eventually leave, taking his family to Texas where he furthered his education, obtaining a master’s degree in police science and doctorate in criminal justice from Sam Houston State University. Neustrom then taught from 1977 until his election in 2000 as a criminal justice professor and department head at UL.

With a year remaining on his fourth term as Lafayette Parish sheriff, Neustrom has opted against running for re-election in October. Shortly after his announcement on Jan. 5, The IND spoke with Neustrom by phone about his time in office and his decision to leave at the end of this term.

“I’d say we improved the overall operations of the agency, and we’ve done that by looking toward national standards and accreditation,” says Neustrom. “We also introduced health care into the jail, and ultimately shifted our focus from a local perspective to what people across the country are doing. We’ve instituted accountability methods for holding our agency in check. I also think we’ve done a better job in selecting people. Quality of personnel was something we wanted to improve on, so we instituted thorough background checks, psychological exams, and we’ve improved technology over the years.”

Neustrom also points to the Willow Street facility opened last year as a shining achievement of his time in office.

“The future of public safety has got to be different than just incarceration,” says Neustrom. “Before, the message was ‘everybody needs to be in jail.’ But now, the mood nationally has turned to prison reform and finding alternatives to incarceration. That’s what we’ve done with the Willow Street facility. If they’re not a threat to the community, why lock ’em up? It’s a minimum security work-release design, and it gives us a place to move in the future and helps Lafayette deal with certain elements that come along with a booming population.”

Neustrom, who lost his 42-year-old daughter Alison to pancreatic cancer in September, says his decision to retire after this term is about entering a new phase in life.

“I guess you just get to a point in life when you want to do some things differently — spend more time with family, other interests, other hobbies,” Neustrom says, adding he’s considering taking up teaching again.

On whether he’ll be endorsing a candidate in the upcoming sheriff’s race, Neustrom responds: “I don’t have any plans to do anything different right now, but you know, things change. So, I’m reserving the right. There’s a number of capable people within our agency and probably some capable people out in the community for this job. My only wish and hope is the things we started be given some consideration. We’re by no means perfect, but we have implemented some progressive programs, so my hope is that whoever takes my place will consider those and evaluate them when they come in.”