Gestational surrogacy in the state is a minefield of contracts and legal questions. 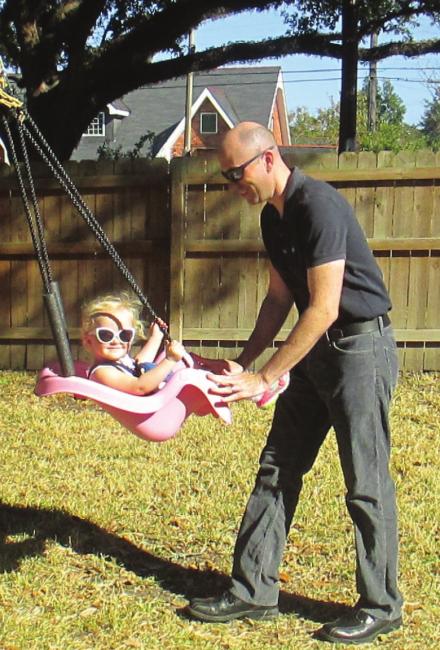 Geromy Moore was sitting on a mat on the floor of a hospital waiting room in India when he got the news: “It’s a healthy baby girl.”

“The rush of emotions came over me,” he says. “This was it. The time had come and my dream of becoming a father can come true.”

Moore’s path to fatherhood wasn’t typical. He always knew he wanted to be a parent, and even after he came out as gay in his early 20s, that desire never faded.

He had a life plan. He would complete a doctorate in plant pathology, establish his career, buy a house and become a parent. The steps he took and the price he paid to father a child would have discouraged many, but Moore says his daughter, Cecilia, who is almost 2, was worth it.

Moore chose gestational surrogacy — implanting an embryo into a surrogate, who carries the baby to term. The surrogate was in India.

Thousands of couples are undertaking the daunting process of having a child through gestational surrogacy. The practice is legal in Louisiana, but surrogates can be compensated only for reasonable living expenses to limit the possibility that surrogacy might become a cottage industry. (In cases where the surrogate isn’t given a large fee, the surrogacy is considered altruistic.) Under Louisiana law, the birth mother is considered to be the baby’s legal mother, even if she carries an embryo conceived with another woman’s egg. In many cases a biological father who has used a surrogate must adopt his own child after it is born. (Moore, who lives in New Orleans, did not have to go through that step because his child’s birth certificate from India carries his name as the father and no mother’s name.)

Last February, State Rep. Joe Lopinto, R-Metairie, introduced House Bill 187 to set up a legal framework for surrogate births in Louisiana, but Gov. Bobby Jindal vetoed legislation that would have authorized courts to approve the practice for couples medically incapable of conception. State Sen. Gary Smith, D-Norco, who backed the bill, has two children born through surrogates outside Louisiana. The bill, which failed, would have required surrogates to relinquish parental rights before the baby’s birth.

Amy Kern, a Louisiana attorney who specializes in assisted reproductive technology law and adoption at her firm Beginning Families, says she would prefer that people using surrogacy be able to obtain a pre-birth order granting them parental rights while the surrogate is pregnant rather than having to adopt their own genetic child following the birth. Contracts between surrogates and parents can be upheld in court under contract law, safeguarding parental rights, she says.

“I’ve been doing this at least 10 years, and nothing has ever gone wrong,” Kern says. She and her husband have three children born through in vitro fertilization.

Despite nature, logistics and the governor, Moore was determined to become a father. He entered a relationship with Peter Dandridge, who at first was not keen on raising a child but changed his mind. Moore’s mother, Theresa Wallot, was overjoyed she would be able to experience grandparenting.

Funds from an inheritance underwrote the expensive financial investment required. The journey to parenthood took more than a year and involved trips to California for a semen deposit and to Mumbai, India, for the birth. There also were multiple layers of red tape.

Because California’s laws are more surrogate-friendly than Louisiana’s, Moore chose to work with PlanetHospital in Beverly Hills, a company that pioneered medical tourism, which enables patients to get less expensive surgeries and medical procedures abroad. PlanetHospital Vice President Geoff Moss contacted Moore and Dandridge immediately and began the process.

Choosing an egg donor was done online. Moore and Dandridge were able to choose particular personality traits and specific talents that might be passed on genetically. For example, Moore is musical and hopes Cecilia will be as well. The couple picked three candidates and interviewed the women via Skype. Cecilia’s biological mother identified herself as a medical student who plays cello and does ballroom dancing. Moore also wanted a donor who would be willing to get to know Cecilia when she grew up.

PlanetHospital helped the couple choose an American egg donor and a surrogate mother in India for a total cost of about $65,000. (Kern says in Louisiana the fee would be closer to $30,000 because of legal restrictions about what a surrogate can be paid; in other parts of the U.S., it can be as high as $120,000, Kern says.) For the $65,000 Moore paid, PlanetHospital handled consular fees, travel, hotel accommodations and coordination. Moore also had to pay for insurance, ovum pick up, transfer of two embryos, pregnancy tests, monitoring of the surrogate, compensation for the surrogate and surrogate aide, meal allowances, medication, medical monitoring and C-section. Gestational carriers who work with PlanetHospital agree to follow a strict health regimen and undergo regular examinations.

Twelve eggs were harvested from the donor, but only two developed to the appropriate stage to be flown to India for implanting in the surrogate. The pregnancy was confirmed in about a week. Moss at PlanetHospital kept Moore and Dandridge informed about the progress of the pregnancy.

Moore got a call from Moss on Feb. 25, 2013 informing him that the surrogate had gone to the hospital and Moore needed to get to Mumbai right away if he wanted to be present for the birth. Moore and his mother made some hasty arrangements, but when they arrived at the hospital, they learned the birth wasn’t imminent after all.

“It wasn’t until we were in India that I was able to hear the heartbeat and to see a live ultrasound [of the baby],” Moore says. “Man, was that an experience. I cried. ... It was from overwhelming joy.”

Finally the day came. “My mom and I were sitting in the [hospital] waiting room with strangers; some of them were friends of my surrogate,” Moore says. “They kept looking at me and smiling. They were more informed about how things were going than I was. That’s partly because the ‘surrogate mother’ [the surrogate’s aide] was getting information.

“At about 3:25, we were called out of the waiting room. The surrogate mother asked if we knew anything yet. I said ‘no’ and she said, ‘It’s a healthy baby girl.’ So then the rush of emotions came over me. ... Then the nurse came out with Cecilia not even cleaned up, freshly delivered, wrapped in a green blanket and crying her little lungs out. I let the nurse take her to clean, and I paid a visit to the surrogate. I repeated, ‘Shukran, shukran,’ which means ‘thank you.’” It wasn’t over yet. Moore and Wallot had to wait for a DNA test to establish paternity before he could bring Cecilia to the U.S. The process, which should have taken two or three weeks, took six. Twice, Moore says, he was approached for bribes to help expedite the process.

“I was a little nervous about it — that someone might run off with my granddaughter,” Wallot says. “I told my husband, ‘You’ll have to move to India, because I am not leaving.”

Despite the obstacles, a growing number of people who want to become parents are choosing surrogacy. One out of seven couples cannot have children because one or the other is infertile, according to the Centers for Disease Control and Prevention. A recent New York Times article estimated that “several thousand children were being born annually through gestational surrogacy.”

Problems can arise because the gestational surrogacy industry is new, and regulation is inconsistent, varying from state to state and country to country. (In the time since Moore dealt with PlanetHospital, the company has filed for bankruptcy and is being sued by clients for $1 million in lost deposits.) Because medical costs are much lower in some foreign countries and laws often are more lax, gestational surrogacy takes place in India, Thailand and Central America. India has since stopped allowing surrogacy for gay couples.

The legal framework surrounding surrogacy is relatively new. In 1988, a New Jersey court had to decide whether birth mother Mary Beth Whitehead or the biological father who had hired her had parental rights over a child the media named “Baby M.” A couple paid Whitehead $10,000 to carry a baby conceived with Whitehead’s egg, making her the genetic mother. After the birth, she reneged on the agreement and ran away with the infant. A New Jersey court ruled the surrogacy contract was legal and the Sterns were entitled to the baby. The New Jersey Supreme Court, however, ruled the contract invalid and called the payment to Whitehead “illegal, perhaps criminal and potentially degrading to women.” The court ultimately ruled it was in Baby M’s best interest to live with the biological father, and surrogacy since has become legal in New Jersey.

After the Baby M case, in vitro fertilization, in which an embryo is implanted in a womb using a gestational surrogate unrelated to the child, became more popular. Gestational surrogacy is now the primary way for infertile couples to have children that carry their DNA. Gay men are the newest market.

Since Cecilia was born, Moore and Dandridge got married in Washington, D.C., and Dandridge adopted Cecilia. The couple plans to remarry in Louisiana if samesex marriage becomes legal here. Moore says he will consider adopting a second child, but having a child that has his genes was worth the time, money and legal wrangling.

“Cecilia will never wonder if she’s wanted,” he says.