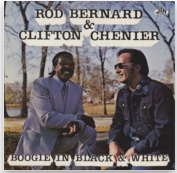 Boogie in Black and White

To understand the magnitude of Boogie in Black and White, you have to imagine two things: Michael Doucet or Steve Riley teaming up with Buckwheat Zydeco or Keith Frank and an all-star band. And that this collaboration occurs a handful of years after the death of segregation and only two years after Jim Crow laws were eliminated from our Constitution.

In 1976, Rod Bernard approached Clifton Chenier about recording an album together as the king was between recording contracts. Bernard, a charting swamp pop star who appeared on Dick Clark’s American Bandstand, and Chenier, the crowned King of Zydeco, were two of the biggest names in Louisiana music. Together, they assembled an integrated band — two blacks and four whites, including Warren Storm — and cut the record in a two-night span at Floyd Soileau’s studio.

Not only historic, the record — now re-released for the fi rst time — is a classic. Listening to it, swamp pop and zydeco fuse into one new sound of washboards, sax, accordions and piano with rhythm and blues styling that sounds like the missing link for modern zydeco. In English, loaded with a good time feel, it has been emulated countless times by countless bands — think every South Louisiana wedding band — but none came close to this.

That said, it’s an album of mostly covers of R&B tracks you’ve heard plenty of times before. And though a great Saturday night listen, it never quite reaches the pitch of Chenier’s “Zydeco Cha Cha” or his other greats. Recorded in just two nights, it evokes a hunger for this all-star band to breach those studio walls. Had they brought this vehicle to live audiences, it could have eclipsed both of their careers, and their legendary performances would still be talked about to this day. 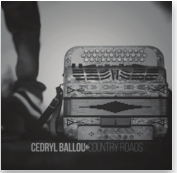 Just from the cover — featuring a black and white photo of his accordion and not a high contrast image of him in Pen & Pixel style — it’s obvious that Cedryl Ballou’s Country Roads is a different sort of zydeco album.

The son of Cedric Ballou, grandson of Classie Ballou (who played on Boozoo Chavis’ “Paper in my Shoe”) and step-grandson of Rockin’ Sidney, Ballou has a bit of a pedigree working for him. Yet, being a young man of his own make, he isn’t absolutely bound to the sounds of his lineage. The result is something a bit Beau Jocque with a slightly more modern feel and about half a dose of nu school lyrics and style. In other words, he’s got one foot (or maybe just a toe or two) in da club, the other in the clubs … Hamilton’s, El Sid O’s, etc.

“Yah” will fi ll a dance fl oor in seconds. With lyrics like “…hold on tight cause we going for a ride,” Ballou keeps it simple and adds some call and response to a perfect old school accordion sound.

Moving more in line with current zydeco style, “The Truth pt. 2” talks of dreams, the stage, the game and has urbanized hype man vocals. Smoov Ras provides the prerequisite rapping guest spot on “Letter” and “Special Privileges” (again moving into modern territory with lines like “She drop it nice and hot, baby/ She’s not gonna shake it for you/ She’s gonna shake it for me”).

“One More Time” features Corey Ledet on keys and organ. Not featuring Ledet on accordion — his normal weapon of dance fl oor destruction — says a lot about Ballou’s confi dence in his own abilities. And it is warranted: his squeeze box skills are on key. The song’s unique lick is akin to Keith Frank sneaking Genesis’ “That’s all” rhythm into “Captain Pawn.”

For a song featuring Lost Bayou Ramblers’ fi ddler and front man Louis Michot, “Country Roads” is surprisingly modern and fresh. Ballou sings “We’re so rough on these country roads,” an unexpected lyrical turn in zydeco. Mixing this updated but not completely nu school delivery with a traditional fi ddle is a brilliant surprise.

Somewhere between old and new is where Cedryl Ballou is right now, and that’s perfect timing for him. 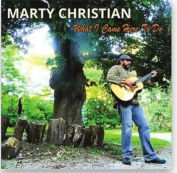 What I Came Here to Do

Honestly, when a white guy from Ohio puts out an album with a name like What I Came Here to Do, it carries a very large possibility of being a cheesy affair and sold in the “Louisiana Good Time Music” bin at whatever French Quarter tourist shop has a place for it right alongside rubber alligators and gumbo paddles. It’s almost certain that the “what” the musician came to do is something like have a good time, party all night or some other stereotype equally steeped in white guy blues. Honestly, Marty Christian should have picked another name for this record because that’s not what, apparently, he came to do.

Christian’s been in Louisiana 11 years, seemingly soaking up touches of the sounds and correctly redirecting them into his own — not throwing a rubboard or accordion in and calling it swamp blues. Instead, he just shows a few shades of what he borrowed from these genres. “Last Train,” for example, is such a close cousin to a Leadbelly track that it’s worth googling to make sure. “Too Much” reflects his Louisiana tenure, adding a jazzy blues touch.

Unlike the records in those tourist traps, this is all original material, not standards that have been covered (poorly) for the upteempth time. And backed by Lee Zeno (Buckwheat’s bassist) and Frank Kincel (Bluerunners and Specklers drummer), it’s a tight record with Delta blues minimalism yet smooth. Unlike the hard time blues men of old, Christian’s gentle and hopeful voice isn’t coming out of a throat full of gravel.

Though there are a lot of “my baby” songs here, Christian goes introspectively deep in penning them, avoiding the low hanging fruit of easy cheese blues.

Contrary to the genre, there seems to be hope in these blues songs. The title track — after it lists four verses of mistakes he made — ends with the assertion, “I just came here to leave with you.” “Louisiana, Hold my Baby” tells of heading offshore and fi ghting on the way out the door. Yet, by the end, it sounds like he might get the girl back.

Going his own route, Christian’s songwriting skills keep him out of the clearance bin. He’s not trying to reinvent or fuse the blues by any means, which is just fi ne.