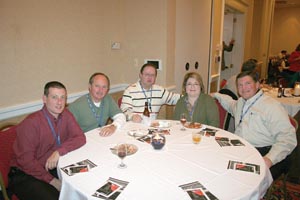 Jody Soileau and Ken Bordelon of SLEMCO with Patrick Logan, Louise Logan and Peter Stawitz at the chamber’s annual Building Community Conference in Many 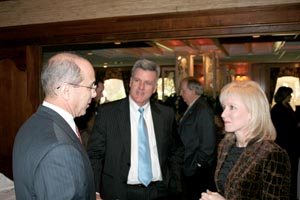 Congressman Charles Boustany, Greg Guidry and Myrtis Ashley at the chamber’s luncheon at the Petroleum Club 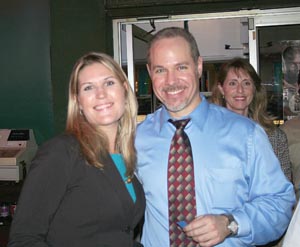 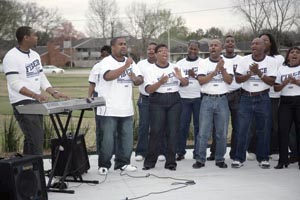 The Cox Choir performs during the grand opening ceremony for the company’s new Acadiana headquarters.

Cox Communications rolled out its new $14-million Acadiana headquarters in style with a recent shindig at its 1906 Eraste Landry Road complex. Word is corporate brass was quite impressed with turnout, estimated at about 800. A central hub for 300 Cox Acadiana employees, the facility houses various operations including a local call center for sales and technical support, customer service, Cox Business and Cox Media. Perhaps more impressive than the size of the 55,000-square-foot complex is the fact that 96 percent of the investment was spent directly with Acadiana businesses — all fixtures, furniture and equipment and professional services including design, engineering and construction. The Lemoine Co. was the general contractor. Even when locals’ bids were higher, the company kept the business here.

A 2006 study by Dr. Anthony J. Greco, professor of economics at UL Lafayette, credited Cox with a $288 million impact on the local economy from its business activity, including $55 million in household earnings above and beyond its own payroll and contract labor expenses. Overall, Cox Acadiana has more than 350 employees with a combined payroll of more than $11 million, excluding benefits.

A number of Cox’s programmers had goodies for those in attendance or sent items for the raffle. Big prizes included a trip for two to Paris from TV5 Monde, 47” TV and a year’s worth of Cox Digital Cable, Dell Computer with a year of Cox High Speed Internet, DVD players, $2,300 advertising schedule on Cox Media and a telescope from Discovery Networks.

The early part of the year is always a busy time for the Greater Lafayette Chamber of Commerce, which gets revved up in January for its annual banquet, held this year on Jan. 17. Then in late February, U.S. Rep. Charles Boustany cleared his schedule to address the board and committee members on current issues affecting Acadiana. Every month the chamber hosts a terrific networking opportunity, Business After Hours, for anyone who wants to attend for a small fee of $2. Marley’s downtown was the venue for February’s Business After Hours.

One of the chamber’s most important early-year events, however, is the Building Community Conference. An overflow crowd not only endorsed the chamber’s strategic plan but also committed to turn the vision into a reality during the conference, held March 7-9. Attendees included Realtors, bankers, engineers, and retailers as well as government officials and other community leaders. Leadership Lafayette Class XXI also participated. The agenda targeted two primary strategic initiatives: workforce development and transportation funding. Jan Brobst, chancellor of the Southwest Louisiana Community College, addressed a general assembly and spoke with pride of the burgeoning enrollment at her school. “We are providing the two-year curriculum that employers are calling for,” said Brobst. “The workforce needed today in this region does not require a four-year college degree.” The goals conference was also attended by state Rep. Don Trahan, state Sen. Mike Michot, Lafayette City-Parish Councilmen Purvis Morrison and Keith Patin and City-Parish President Joey Durel, all of whom addressed the membership. For the past several years, the conference has been held at the Cypress Bend Golf Resort and Conference Center in Many. SLEMCO was this year’s presenting sponsor. 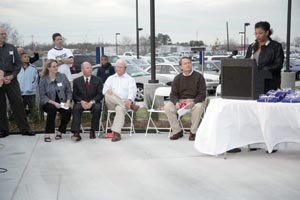 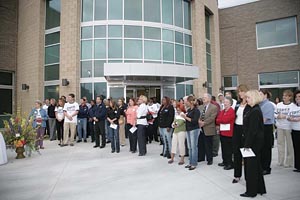 The crowd gathers in front of the 55,000-square-foot Cox Acadiana headquarters. 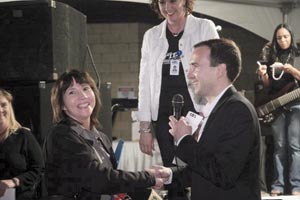 Connie Mouton of MidSouth Bank is greeted by TV5 Monde’s Patrice Courtaban as she’s named the winner of a five-day trip for two to Paris.