SO FAR, SO GOOD

It's the big question on just about everybody’s mind: Where is Lafayette's economy headed? Because regardless of how closely connected to oil your business is, your way of life in these parts is still largely tied to how well the oil and gas industry performs.

The really good news is that we’re not nearly as dependent on oil as we were the last time oil prices nosedived on over-supply in the mid- 1980s, taking our economy down with it.

At LEDA, via our own Economic Performance Index, we are closely tracking the economy to keep you informed and able to plan for the future.

Lafayette’s economy has steadily grown since 2010. The index has increased 18 percent since hitting a decade low in August 2009. This economic prosperity has created many opportunities, including business recruitment announcements from Bell Helicopters, CGI, Perficient and Enquero in the past 13 months.

The incredible amount of recent projects and investment in Lafayette is a reflection of our economic strength and diversification. While the local economy has diversified its industries, we are not immune to sustained pressures to a predominant industry — like we are experiencing now with the drop in oil prices. Given the unpredictability and volatility of energy prices, it is difficult to estimate the impact this will have on the local economy or for how long we could feel the effects. The EPI will help us identify changes in the economy and quantify the impact.

When looking at all 15 indicators as a whole, the fi rst half of 2014 was off to a solid, strong start but has slowed a bit in the third quarter due to shifts in some leading indicators. When all three categories of indicators — leading, current, and lagging — move in the same direction, it means that the local economy will continue on that track.

With the leading indicators showing signs of decline in response to low crude oil prices, it is expected that the current indicators will begin to shift in the fi rst quarter 2015 and the lagging indicators in late fi rst quarter or the second quarter 2015. This could lead to a small blip on the radar, much like the drilling moratorium in 2010, or it could be more impactful depending on how depressed energy prices are over the next year.

Good news is still coming in for Lafayette, though. For the sixth time in seven years, the Lafayette MSA is ranked in the top 25 metro areas in the Milken Institute’s Best Performing Cities Index. Lafayette gained fi ve spots, coming in at 19 out of the 200 largest metros. Editors note that Lafayette has benefited from job creation in industries that support the energy sector, thereby stimulating growth in consumer spending and creating more retail jobs. Recent announcements of 1,000 technology jobs point to the region’s diversifi cation efforts and may help to attract a highly educated workforce and retain technology graduates from the university.

For a detailed overview of leading, current and lagging indicators, go to acadianabusiness.com/3QEPI. Also, be on the lookout for the fourth quarter EPI, which will be published in the April- May issue of ABiz. That should really tell us where we’re heading. 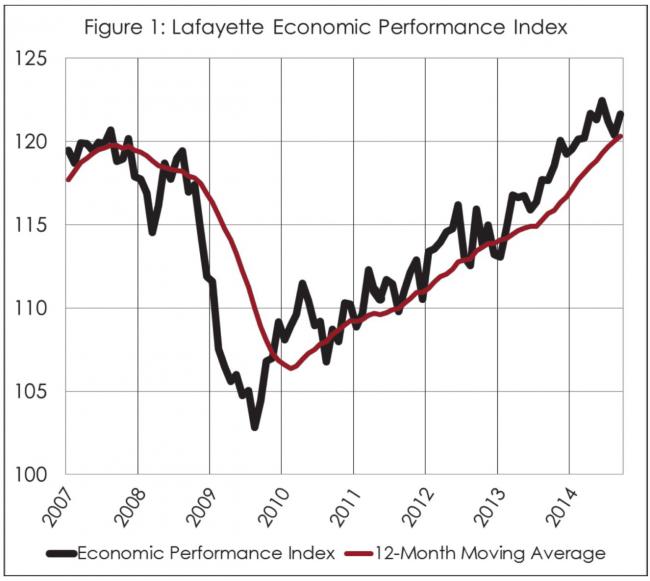