A Lafayette church urges its members not to support a local breast cancer research charity because of perceived ties with Planned Parenthood. 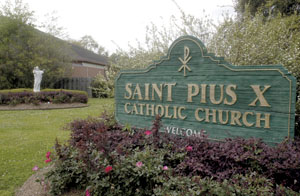 On Sunday morning, March 2, the members of St. Pius X Catholic Church read in their church bulletin that the Knights of Columbus was throwing a Friday night fish fry, Catholic Relief Services was taking collections, and the seating capacity was becoming limited during Mass, “a nice problem to have.” The bulletin also stated: “It has come to our attention that Susan G. Komen Foundation has a history of continuing support of Planned Parenthood, the nation’s leading abortion provider, and is currently a boycott target of ‘Life Decisions International,’ a pro-life organization targeting companies and organizations that financially support Planned Parenthood. Therefore, we cannot endorse their fundraising activities despite the worthy cause of breast cancer.”

It was just two weeks before Acadiana’s annual Race for the Cure. Nicole Jones, board president of the Acadiana Affiliate of the Susan G. Komen for the Cure, says she had hoped to meet with the Rev. Steve LeBlanc of St. Pius to discuss the church’s position and Komen’s local role, but he was out of the office. “We wanted to let him to know where the money goes,” Jones says. Instead, she delivered a packet of information to the church. A month later, she still hasn’t spoken with a representative from either the church or the Roman Catholic Diocese of Lafayette.

Susan G. Komen for the Cure is a national charity dedicated to eradicating breast cancer. The organization’s annual Race for the Cure is a series of 5K runs hosted by local affiliates to raise money for breast cancer research and awareness. Nationwide, there are 122 affiliates, six of which are in Louisiana. The Acadiana Affiliate of Susan G. Komen for the Cure serves Lafayette and the surrounding parishes. Seventy-five percent of the funds raised by the group remain in Acadiana, supporting community projects related to breast health education, screening and treatment. The other 25 percent supports Komen’s national breast cancer research program. The organization’s policy dictates that national moneys, which don’t flow back down to the local level, be used for research.

“Each local affiliate operates separately,” Jones says. Since its inception 10 years ago, the local charity has granted $737,000 back to other community organizations. Not a dime has gone to Planned Parenthood. “We don’t share any money with any other affiliate or decision-making or vice versa,” she says. “We fund the education, screening and treatment programs locally, and it’s specific to breast cancer. The money can be used for nothing else.”

In an e-mail to The Independent Weekly, St. Pius’ LeBlanc writes the church originally made its decisions based up on the recent actions of the Diocese of Little Rock (read his statement on P. 6) and makes no mention of the group Life Decisions International. He adds: “I don’t want to be adversarial with the foundation which does wonderful and incredible work with breast cancer screening and research. I would want more information about its association with Planned Parenthood and from good sources. I don’t know if that is really possible. There is no need to damage the extremely good work of the Komen Foundation with speculation about what might be happening.”

LeBlanc would not answer any questions from The Independent Weekly — including whether the church would not endorse other charities and businesses targeted by Life Decisions International for their association with Planned Parenthood — and referred all questions to the Diocese of Lafayette’s Office of Pro-Life Issues. Calls placed to that office were not returned as of press time.

Jones says she’s not aware of any other local organizations that have withdrawn support for Acadiana Komen or if St. Pius as a whole has ever even supported the charity’s efforts. “Chances are some of their members have participated in the race,” she says. “But the church, to my knowledge, has never made a donation to our local affiliate.”

This controversy is one that’s also unfolding in at least five other cities. On Thursday, WTHR TV-13 in Indianapolis reported that the Catholic Diocese of Lafayette in Indiana is urging its members to boycott that community’s Race for the Cure in mid-April, which is expected to attract some 40,000 people and raise $2.5 million. According to the station, Komen officials there say they were never contacted by the diocese about its decision before it was made public; WTHR, which sponsors the local race, was unable to reach a diocese spokesman for comment.

In February, the Diocese of Little Rock urged its members not to donate to Komen because of its alleged connection to Planned Parenthood. In March, the diocese’s bishop, the Rev. Msgr. J. Gaston Hebert, rescinded the statement, saying it was “based on unintentional error.” He said, “To let that statement stand would be an act of injustice.” Hebert apologized to Komen and wrote: “The reality is that the national Komen foundation does NOT give grants to Planned Parenthood — and, therefore, money given to Komen in Arkansas does NOT, even indirectly, fund abortion. Thus, my major reason for releasing the position statement was NOT valid.”

Confusion as to how and to what degree Komen is associated with Planned Parenthood still reigns. And although the national Susan G. Komen for the Cure doesn’t support or fund local Planned Parenthood affiliates, the tenuous connection between the organizations has still inflamed strong opinions on abortion — and even the entire Komen organization.

In a recent Daily Advertiser editorial titled “Komen Foundation should acknowledge cancer-abortion link,” guest columnist Cynthia Labutka wrote: “The Komen organization, along with medical professionals who are pro-abortion advocates, does not acknowledge the undeniable connection between abortion and breast cancer. It is called the ‘A-BC Link.’ Since Roe v. Wade in 1973, breast cancer rates have increased by 40 percent.”

Rebecca Gibson, communications director for Susan G. Komen for the Cure, says of the assertion, “The National Cancer Institute’s review of recent scientific literature reveals that no conclusive evidence exists to suggest that abortion increases a woman’s risk for developing breast cancer.”

The Advertiser editorial concludes: “Breast cancer keeps Komen in business because women are constantly ill and dying, and people keep giving money. Twenty-five percent of locally raised funds go directly to their main office, and a percentage of that goes to Planned Parenthood, the largest provider of abortions in the United States. Planned Parenthood is not in the business of helping women by screening for breast cancer.

“The Komen organization perpetrates a crime against all American women by failing to warn those who are at risk.”

Gibson adds, “We’re very open in making sure that people understand the nature in which we do fund Planned Parenthood so they can understand what our affiliates do at the local level in their community.” She says affiliates are incorporated locally so they make local decisions, unencumbered by national directives. “The need in the greater Denver metropolitan area is going to be distinctly different than what’s happening in Louisiana, and we want to make sure our affiliates are funding programs that are relevant to the needs of their service area,” she says.

“I don’t care,” says Doug Scott, president of Life Decisions International, the group cited as the information source in St. Pius’ bulletin. “What does that matter to us? What they’re trying to say is, ‘Look, if the Komen organization in Houston wants to give to Planned Parenthood, they can do that.’ Then all the other Komen organizations are supposed to say, ‘That’s fine. Go ahead and do that. We’re not related.’ But that’s just a smokescreen. They’re one organization.”

Scott says the mission of his Fort Royal, Va.-based organization is “to challenge the agenda of Planned Parenthood.” He adds, “You can’t separate Planned Parenthood from abortion any more than you can separate racism from the Ku Klux Klan. It’s a major part of their goals and their philosophy — worldwide abortion, any time, anywhere — and they admit that in their publications. To be associated with that in anyway or to claim, ‘Oh, it’s only over in that county, not this county, so I shouldn’t care’ — if people are being discriminated against in the next county over, should I not care?”

Scott says that although Life Decisions doesn’t track the amounts that organizations give, there are several ways to determine which entities support Planned Parenthood, including annual reports and IRS 990 forms. “It could be a letter that somebody sends us a copy of that says, ‘Yes, we support Planned Parenthood,’ and that one might be the only evidence we have. One time we had a company vice president contact us saying that he was trying to get his president to stop giving to Planned Parenthood, but he wouldn’t do it, so we should put him on The Boycott List. So, there’s all different sorts of ways to get the information.” LDI sells an average of 10,000 copies of the list a year, and Scott says keeping it updated is a full-time job. “We’re very careful that every thing we publish is accurate. Not even once have we made a mistake.”

The recent issue of Health Progress, the journal of the Catholic Health Association of the United States, poses the question: “Is it morally permissible for Catholic health care organizations (CHCOs) to be involved with and support the activities of philanthropic organizations (POs) such as Susan G. Komen for the Cure, the March of Dimes, and the Juvenile Diabetes Research Foundation?” The article uses Susan G. Komen as an example, writing: “Some would argue that by providing funds to Planned Parenthood for breast health services, Komen is ‘freeing up’ money for abortions. No evidence exists that this is the case.” The article concludes: “By adopting an excessively rigid stance and not cooperating with POs because they may be involved in some wrongdoing on some level, CHCOs would be absenting themselves from efforts to prevent, treat, and cure a host of serious diseases and medical conditions, and assist those affected by them and their families; miss opportunities to witness to their own values and moral convictions; and fail to provide any kind of transformative influence.”

This year’s Race for the Cure in Lafayette attracted a record crowd of 6,117 participants — 2,400 more than the previous year’s race and double the size of the race two years ago. “I think the numbers we had at the race speak for themselves,” Jones says. Despite the impressive growth, she says there’s still work to be done in both research and public outreach.

“We’re going to do a better job of making sure that people know where the money’s going,” she says. “I think that people who are familiar enough with the Komen organization as a whole — and with the work we’ve done at the affiliate level here in Acadiana — know we’re doing good in our community."

Where does the money go?

According to Nicole Jones, board president of the Acadiana Affiliate of Susan G. Komen for the Cure, here’s how the $227,190 raised by the charity this year will be spent in Acadiana:

“I don’t want to be adversarial with the Foundation which does wonderful and incredible work with breast cancer screening and research. I would want more information about its association with Planned Parenthood and from good sources. I don’t know if that is really possible. There is no need to damage the extremely good work of the Komen Foundation with speculation about what might be happening. I can only refer you to the Pro-Life Office of the Diocese of Lafayette who has more time to research this issue and who will be working with the Bishops of Louisiana to make a statement on this issue, and how we can still fund the much needed breast cancer screening and research to assist women in this health issue. If not through SGK Foundation, then other places that we can support this vital issue.”