A local program, which works like eBay, allows nurses to pick up extra shifts through the bidding process.
Shortly after joining Lafayette General Medical Center’s staff as a licensed practical nurse two years ago, Jenny David learned that the hospital was launching a “shift bidding” program that would allow nurses to bid against each other to pick up extra work. Called “i bid,” the proposal immediately prompted thoughts of switching her status to what’s commonly called PRN, an as-needed basis that would give her more flexibility in her work schedule. The trade-off, however, would be that she’d lose her health insurance and other benefits. 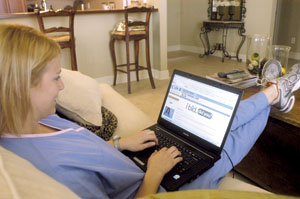 “I sat down with my parents and did the basic [base pay plus 30 percent] of what I thought i bid would make, and I still came out ahead,” David says.

Two years later, David is making even more money than she estimated, having honed her bidding skills to the point where most of the extra shifts she takes on pay her time and a half. Some weeks she works 24-30 hours; others 40-48. “I really don’t work much more than I did on staff,” says the 28-year-old.

For LGMC, the bidding program has been so successful with nurse staffing that it was expanded a year ago to include respiratory therapists and just a few months ago medical technologists.

“It’s definitely been a hit,” says Cindy Angelle, staffing coordinator for the hospital’s nursing department. Except for dialysis, LGMC has eliminated all of its long-term, or “per diem,” nursing agency contracts, which are very costly, and only has two short-term contracts still in force.

The staffing coordinator says i bid was LGMC’s creative response to the stress hurricanes Katrina and Rita put on the hospital’s staffing requirements. “We had so many patients, because we had Katrina, and then Rita from the other side, and we were right in the middle,” says Angelle, who played a key role in getting i bid off the ground.

In an effort to plug holes in its nursing schedule, LGMC began allowing employees to bid against each other for the extra work. The incentive is a percentage of base pay on top of the regular rate. The only other hospital in the state to follow LGMC’s lead by instituting a shift bidding program is Our Lady of the Lake in Baton Rouge; unlike the local hospital, however, the Lake even allows nurses from other hospitals to bid on shifts.

The key is that it allows nurses to plan for extra shifts, Angelle says. “It’s a great way to make more money, [but] everyone has to fulfill their obligation before they do the i bid,” she says, explaining that every nurse has a set schedule that has to be worked first.

Jason Rogers, an ICU nurse manager at the Lake with 40 employees under him, has seen positive changes as more shifts are getting filled, even though the program was only implemented in November.

“I’ve seen the morale of the staff go up with the shift bidding,” he says. “They’re being paid well to work these extra shifts. Before they would do it to help their unit out. Sometimes they would get their incentive pay, and sometimes they wouldn’t. It would just be overtime for them. Now they know up front they’re going to get the premium pay, so they come in with a better attitude.”

The reaction among nurses has been positive, resulting in units being less short-handed these days. “I think they like that they don’t have to wait for me to call them,” Angelle says. Because they can see where all of the open shifts are across the hospital, people who are qualified to work in other units like that they have more options. “Some people like to branch out to other floors,” she adds.

Debbie Herlevic, a registered nurse who’s been with the Lake for 27 years, says the extra incentive attached to shift bidding encourages nurses to sign up for extra shifts when they might not otherwise. “Personally I think it’s worked out really well,” she says. “I’ve participated in it a lot.”

And while i bid has resolved some issues, it certainly has not solved the bigger problem — that the demand for nurses continues to outstrip supply in Louisiana and around the country, a scenario that shows no signs of improving and is projected to get much worse.

The state has about 50,000 licensed nurses, according to the Louisiana Board of Nursing — about 6,000 shy of what it ought to have.

The Lake has tried various tactics to attract and keep nurses, including sign-up bonuses — a plan that was dropped after an outcry from existing full-time staff; LGMC hasn’t offered sign-up bonuses since 1986. It’s common, however, for hospitals in major markets to lavish sign-up bonuses as much as $1,000; Lafayette and Baton Rouge are fighting Houston and Dallas, which have huge shortages.

But LGMC has devised other incentives to encourage nurses to stick around, such as paying for them to go to school. It offers tuition reimbursement assistance for students who maintain a 2.5 GPA while working toward their degree. Another program, which has a six-month probationary period and requires a two-year commitment, reimburses up to $12,000 for a student loan. The money is paid out over the duration of their employment.

At the Lake, a licensed practical nurse can get money to become an RN. Likewise, RNs with an associate degree can get money to earn their bachelor’s and/or master’s. New graduates are reimbursed for the money they spent on nursing school. However, nurses who have their school paid for by the Lake are required to work one calendar year for every credit hour the hospital covers.

What’s responsible for the nursing shortage? Some think it goes back to the country’s experiment with managed care in the 1990s. Hospitals started closing their doors and laying off nurses to the point that far fewer people went to nursing school. Today it’s opposite: A good nurse can write his or own ticket.

“You work when you want,” the Lake’s Rogers says. “Job security is huge with nursing.”

“I think [there is a shortage] because nurses have so many opportunties,” says LGMC’s Angelle, explaining that tertiary care hospitals like LGMC are often viewed as a training ground that turns out nurses who are marketable in a number of ways. “You can travel, work 9-5 in a doctor’s office. You can work at home as a [legal nurse consultant],” she says.

While the number of actively licensed nurses in the state grows each year, many could be working in other states, speculates Carl Nagin, an analyst with the Louisiana State Board of Nursing. He says one reason hospitals are experiencing shortages is that so-called travel nursing pays much better than working for a single hospital.

There is another reason for the shortage: Nursing programs don’t have enough faculty to teach everyone who wants to go to nursing school, which puts a damper on potential enrollment.

Those instructors, meanwhile, are 50 years old on average, and it’s unlikely there will be enough new ones to fill the void left when they retire. Also, the average age of today’s hospital nurse is late 40s. There’s a dwindling pool of nurses and nursing faculty on one hand, and an approaching tsunami of retiring boomers, guaranteed to send demand for nursing services ever skyward, on the other.

Shift bidding isn’t a cure-all by any means. But it helps — as it might in any industry with similar staffing shortages.

David believes the flexibility offered by programs like i bid will go a long way toward keeping nurses in the profession, another problem the industry faces. “There’s a girl who’s about to get married so she’s picking up an extra 12-hour shift every week,” David says. “Every day I get here and I love what I do. I work as much as I want. I really base my schedule on what I have coming up in my life.”

A version of this story first appeared in Baton Rouge’s Business Report.