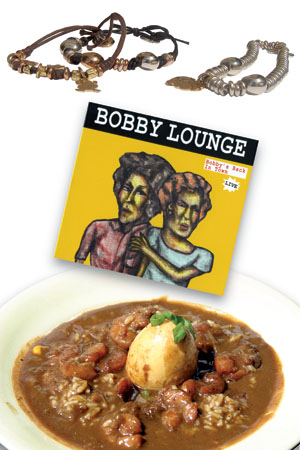 ROUX WITH A DIFFERENCE
Fridays can’t come soon enough. No, it’s not the weekend; it’s the Friday lunch special at Village Market in River Ranch. The town market is known for light salads and trendy sandwiches, but since 26-year-old cook Brennan Caffery has come aboard, he’s been hard-headed about introducing some down-home cooking. On Fridays only, he spoons out some of the darkest, richest shrimp stew around for $6.99. Rouxs are deeply personal, and Caffery’s is really bottom of the pot. The shrimp in the stew are joined by a country touch, an entire hard boiled egg. He serves his stew over rice with a side of jalapeño spiked corn, and while unorthodox, swirling the corn into the gravy adds just the right sweet crunch to the plate lunch. For more info, call the Village Market in River Ranch at 981-8085. — Mary Tutwiler

LOUNGE ACT
Since bursting onto the scene with his 2005 Jazz Fest performance, Mississippi singer-songwriter Bobby Lounge’s soulful boogie-rock piano style has earned him comparisons to legends like Little Richard and Jerry Lee Lewis. His songs are something else, twisted Gothic narratives with characters including a flamenco-dancing baby named Al Fresco, a voodoo priest pickpocket, and a cross-dressing eccentric whose wife complains he makes “the Marquis de Sade look like Mickey Mouse.” Lounge’s recently released third album, Bobby’s Back in Town, is a live recording from a 2006 show at the Fuhrmann Auditorium in Covington. The CD sells for $15 and is available online at bobbylounge.com. — Nathan Stubbs

DODO FOR A CAUSE
It’s taken more than a decade, but the DoDo has finally arrived in Lafayette. Pomellato, the Milan-based international jewelry brand, has brought its DoDo Collection to kiki in River Ranch. Named for the dodo bird, the assortment of 18 karat charms on leather began in 1995 as a way to raise awareness and funds for the world’s endangered species and their habitats. A portion of the profits go to the World Wildlife Fund in Italy. With more than 100 charms and beads to choose from, the clever concept allows you to design your own bracelet or necklace and gives you the ability to easily to add either over time. Prices start at $125. To add to the sentiment, each charm has a meaning (the swallow: “please come back,” and the dog: “I’ll always be by your side.”) The DoDo Collection is available exclusively in the state at kiki. Call 406-0904. — Leslie Turk