Superhero Movie isn’t funny because it’s stupid, and it’s stupid because it isn’t funny. A few weeks ago, film critic and cultural crank Joe Queenan held forth in the pages of The Guardian on a topic near and dear to his hard and happy heart: the worst movie of all time. Those familiar with Queenan’s inimitable style will know this was more than idle chat. The man knows of what he speaks. He has written with wit and intelligence, exasperation and masochistic glee, about some of the worst of Hollywood’s output (indeed, some of the worst of Western culture). He loves to hate bad movies.

Not content to simply slap the worst-movie-ever sobriquet on the latest, greatest multiplex offering (for his purposes, Paris Hilton’s The Hottie and the Nottie), Queenan seizes the opportunity to talk to us about what truly qualifies a film as a cellar-dweller, and it goes far beyond the screen:

“Though it is a natural impulse to believe that the excruciating film one is watching today is on a par with the excruciating films of yesterday,” Queenan reminds us, “this is a slight to those who have worked long and hard to make movies so moronic that the public will still be talking about them decades later.”

He elaborates, establishing the eternally infamous Heaven’s Gate as his selection for worst-ever: “To make a movie that destroys a studio, wrecks careers, bankrupts investors, and turns everyone connected with it into a laughing stock requires a level of moxie, self-involvement, lack of taste, obliviousness to reality and general contempt for mankind that the average director, producer and movie star can only dream of attaining.”

Read Queenan’s measured rationale (you can find it at film.guardian.co.uk) before attempting to sit through Superhero Movie. Otherwise, you may not make it. Queenan’s quibbles are very helpful, in that they will allow you to remind yourself again and again (and again) that Superhero isn’t the worst movie ever made. Just maybe the stupidest. Or most annoyingly unfunny. Or biggest waste of digital space. 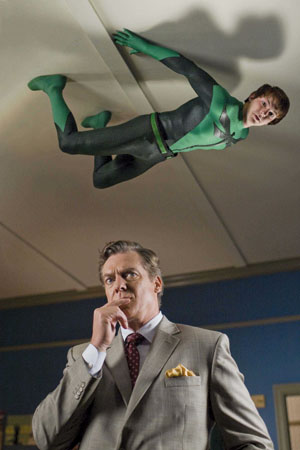 Young Ric Riker (Drake Bell) is a regular high-school nobody. He’s a clumsy social outcast with one friend Trey (Kevin Hart) and a crush on the impossibly perfect Jill Johnson (Sara Paxton). He suffers in silence, until one day on a field trip to the high-tech labs of the leering Lou Landers (Christopher McDonald), he’s bitten by a genetically modified dragonfly.

Suddenly, he begins to discover pesky superpowers he must learn to control. Blah, blah, blah. Most of the so-called jokes of Superhero rest on the familiarity of its conventions — less-than-revelatory knee-slappers like the fact that comic-book characters love their alliterative names. On that note, Superhero mostly adheres to Spider-Man spoofs, with a little Batman, Fantastic Four and X-Men occasionally thrown in for bad measure. The rest of Superhero’s so-called jokes rely on that hilarious stand-by of the bodily function. Because if one flatulence joke is funny, why not try another one? And excruciatingly prolong it? Oh, and then flog to death YouTube, Craigslist and Facebook references because, you know, it’s what the cool kids do.

Now make no mistake: stupid humor really can be smart. Practitioners like Will Ferrell and Mike Myers prove it all the time. Both have made spoof movies that do considerably more than point out the obvious and make the periodic pee joke. Myers’ Austin Powers series sends up the spy genre that gave it birth with a slyness that manages to envelop even its bawdiest humor. And a Ferrell film like Talladega Nights touches out at all the inspirational-sports-movie clichés without simply being a revisitation of them. The beauty of these kinds of movies is that there is so obviously a brain behind them. Not so with Superhero.

Despite the few smileworthy asides he manages over his interminable hour-and-a-half script, writer-director Craig Mazin should not be allowed to tell jokes around the studio water-cooler, much less ever helm a Hollywood project ever again. While his movie, under Queenan rules, cannot be called the worst, the truth is that Superhero is just that bad.