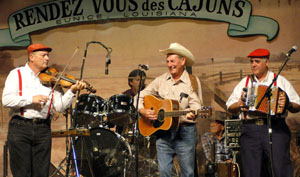 The "Cajun Hank Williams" turns 76 on April 14. In honor of his birthday, Terry Huval of Jambalaya cooked up a party so that all D. L. Menard’s friends and admirers can celebrate with him. On Saturday, April 12, the Liberty Theatre presents a very special “Rendez-vous des Cajuns.” Dubbed “The Spirit of 76,” the Jambalaya Cajun Band will join Menard in a musical history of his career.

Doris Leon Menard was born in 1932 in Erath. He was a young musician when he met Hank Williams in 1951 at the Teche Club in New Iberia. A year later, he joined the Louisiana Aces, eventually becoming band leader. In 1962 Menard had a hit with his signature song, “La Porte d’en Arrière,” a song about having to sneak in the back door after an evening of drinking and carousing. Some of his recordings include D.L. Menard and the Louisiana Aces (recorded in 1974 and released in 1988), Under a Green Oak Tree (recorded in 1976 with Marc Savoy and Dewey Balfa and released in 1989), Cajun Saturday Night (1985) and Cajun Memories (1995). In 1994 Menard received a Folk Heritage Fellowship from the National Endowment for the Arts. When he’s not making music, he makes chairs and children’s furniture in his “chair factory,” next to his home in Erath.

Next Saturday night is shaping up to be a sell-out at the Liberty, so get your tickets early. There will be jambalaya and birthday cake as well as popcorn. Tickets, $5, go on sale at 4 p.m. on the 12th at the ticket window of the Liberty Theatre, the show starts at 6 p.m. For more information, call 457-7389 click here .