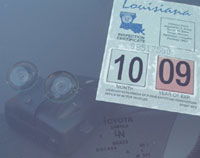 While Lafayette Consolidated Government struggles with how to deal with the flood of violations being issued by its controversial SafeSpeed and SafeLight programs, a Web site alleges that Tony Tramel has been tooling around town with his own personal radar detector.

TheNewspaper.com, "a journal of the politics of driving" reports today that the LCG's Director of Traffic and Transportation was spotted with a radar detector in his car at a recent city-parish council meeting:

Tramel did not respond to a request for a comment about why he uses a detector. It is unlikely, however, that he would actually find a speed camera ticket waiting for him in his mailbox. The transportation director's duties include the review of speed camera photographs submitted by Redflex, the private Australian vendor that operates the ticketing vans. Tramel has the authority not only to cancel tickets, but also to give final approval to the locations chosen for camera van deployment.

Richard Diamond, editor of the Washington D.C.-based Web site says the photo of Tramel's car with its radar detector was taken a couple of weeks ago after he got out of the vehicle to attend a council meeting. Diamond says the license plate was not verified with the Department of Motor Vehicles to determine whether Tramel was the owner of the car, but he says that's not even an issue. "The way that the Lafayette ordinance is set up, the presumption is that the owner of the car is the driver," he says. "That's his ordinance."

A phone call to Tramel's office this morning went unreturned.