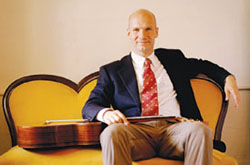 German classical guitar virtuoso and former UL guitar professor Gerd Wuestemann appears poised to become the next executive director of the Acadiana Arts Council. At a special meeting last night, the AAC's board of directors accepted a recommendation from its executive committee to negotiate a contract with Wuestemann to fill its top position. The board has been searching for a new director since January, following the abrupt resignation of longtime director Buddy Palmer.

Arts Council board president Ed Abell says that the hire is not yet official, pending contract negotiations. “We don’t have an agreement,” he says. “We have a proposal in process, but it's not been accepted. We just need to be sure we’re all squared away and that’s what we’re working on.” (Wuestemann also is currently event producer for The Independent Weekly’s Corporate Challenge.)

Abell says the board received 55 resumes for the position and that the executive committee conducted 17 interviews with candidates over a period of several weeks. “It’s been kind of an exhaustive process,” he says. "We have a preferred candidate. Obviously there was more than one qualified candidate. We have made a choice about what we’d like to do." Abell hopes to have a contract finalized within the next two weeks.