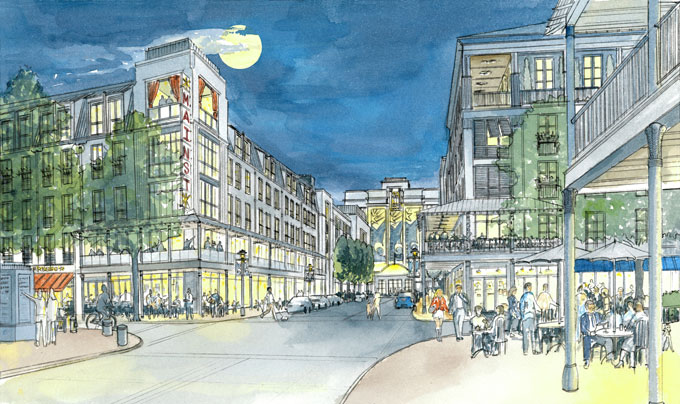 PUBLIC NEED AND THE PUBLIC GOOD ARE AT LOGGERHEADS IN DOWNTOWN LAFAYETTE, AND THE IMPASSE HAS STYMIED A PROGRESSIVE VISION FOR WHAT THE AREA CAN BE.**

Imagine Downtown’s Rue Principale — Main Street for most of us — crossing Jefferson Street with cafés, offices and retail shops snuggled up to broad sidewalks on either side that run under overhangs, canopies and balconies jutting from apartments and condos two, three and four stories high. The architecture is a mix of traditional and modern, yet characteristically “South Louisiana.” Colors burst.

Picture windows on the ground-level commercial spaces let light in, giving passers-by a look in and employees a view out.

There is a sense of both vibrancy and enclosure in this redeveloped street — an “outdoor room,” as those in the urban redevelopment movement like to call it.

Looking west, the scene extends as far as the eye can see, which unfortunately is but one city block, ending at a parish courthouse built in the 1960s that rises seven garish stories and blocks our view of Lafayette’s most prized and historic architectural gem, the Cathedral of St. John the Evangelist. But the parish courthouse has been re-skinned to meld with the new character of this little nexus of Downtown’s tomorrow.

The catalyst for this cool was the old federal courthouse at the corner of Main and Jefferson, which sat vacant for 15 years. The site, like the redevelopment it galvanized, is now shops, offices, apartments and condos.

What’s not to like? That’s a rhetorical question, because the old federal building remains largely vacant today, a place for Lafayette Consolidated Government to store junk and for pigeons to roost — the prized queen in a stalemated chess match between the city of Lafayette and Lafayette Parish, between City-Parish President Joey Durel and the judges and clerk of court at the Lafayette Parish Courthouse, which is a nearly 50-year-old building overdue for replacement.

Years before the Durel administration and, later, Downtown Development Authority Chief Executive Officer Nathan Norris settled on the federal building as the ideal starting point for redeveloping the area and introducing large-scale residential development to the district — the city of Lafayette owns it, purchased at a fire-sale cost of $800,000 from Uncle Sam in 2001 in a deal brokered by the Lafayette Public Trust Financing Authority — the district judges settled on the vacant building as the most feasible site for a new parish courthouse, estimated to cost about $60 million.

The parcel also includes the old Lafayette Police Department headquarters facing Jefferson, and the Acadiana Open Channel building and what used to be the Lafayette Public Library along Lee Avenue — just under two acres total.

The DDA/Durel vision for Main Street, beginning with the old federal building, is arguably vital to the economic development of not just Downtown but Lafayette in general.

Having a robust residential component in the area will create the demand to sustain a host of commercial ventures — be it new restaurants, boutiques or any number of retail businesses. It will also help bolster the existing businesses Downtown, some of which, as our sister publication ABiz reported last month, have struggled of late.

As important, it will offer incentive for those Downtown property owners whose buildings are linked to the precious dozen or so bar/liquor licenses assigned to the area to lease their premises to businesses other than bars. We love a cocktail or cold beer as much as anyone, but there are too many bars in Downtown Lafayette, a condition that discourages residential development due to the large and often noisy crowds partying along Jefferson Street on weekend nights.

Fewer bars and more restaurants and retail shops Downtown would be ideal. DDA’s plan for Main Street would foster that.

Beyond the immediate area there are broader economic development considerations related to redeveloping the Main/ Jefferson corridor. One of the first questions executives considering a city for relocation or expansion ask, after the quality of schools, crime rates and access to recreation, is about the vibrancy of its urban core. Young professionals want a downtown with dining and entertainment options.

A redeveloped Downtown Lafayette can also serve as a connector for the university and our city’s most historic neighborhoods, which are undergoing a renaissance of their own as young professionals and families move in and rehabilitate homes.

A refrain we’ve heard before is that anything in the old federal building is better than nothing. Not so, says DDA’s Norris.

“The worst thing that could happen is anything happening there,” Norris says.

Geoff Dyer, DDA’s development director, has drawn up plans for what a redeveloped Main/Jefferson corridor could look like. But LCG has yet to get an appraisal on the property. Some members of the council have expressed a willingness to discuss a possible redevelopment, but others have shown little interest in even seeing a slide presentation laying out the possibilities, in part because they’ve seen the admittedly compelling evidence that Lafayette Parish needs a new courthouse and also due to a general unease in Lafayette selling to private developers a 1.8-acre asset in the heart of the city.

Durel says the process of getting that appraisal is finally under way. “I think it is premature and silly,” he adds. “But, if it gets certain councilmen there, we will do it.”

Eight years ago Lafayette Parish voters shot down a tax proposition to fund a new $70 million courthouse. The current building went into service in the late ’60s when the parish population was about 75,000. It’s now about 235,000, and the Lafayette Parish Courthouse hasn’t kept pace.

The sixth and seventh floors are currently being renovated as part of a $15 million upgrade — local and state funding — that forced the district attorney’s office to abandon the sixth floor and set up office in the old Whitney Bank building on Lee Avenue. Once the renovations are complete sometime this summer, the clerk of court’s offices currently on the bottom two floors will move to six and seven for about a year and a half while the first two floors are renovated and asbestos is removed.

There’s never been a place in the courthouse to hold prisoners awaiting hearings; the prisoners are often shackled together in groups brushing shoulders with the public. Cramped, inadequate elevators are being replaced, but the work is slow.

For the judges, bailiffs, deputy clerks and others, it’s been constant disruption for months and will continue into the foreseeable future because, the fact remains, there is no money to build a new courthouse and the property taxes that fund maintenance at the courthouse and adjacent Lafayette Parish Correctional Center, approved by voters in the 1980s, are inadequate.

According to Clerk of Court Louis Perret, two taxes fund the courthouse and jail: a courthouse maintenance fund (2.34 mills parishwide that generates about $4.4 million annually) and a correctional center maintenance fund (2.06 mills for $3.9 million). When these taxes were passed, the parish jail was on the seventh floor of the courthouse. Now, the new facility that opened in 1984 gets all the latter property taxes and, according to Perret, most of the former fund goes to the jail as well, leaving little for routine courthouse maintenance. The renovations, Perret adds, are mainly mandated by the fire marshal out of public safety concerns.

The judges so far have balked at a proposal to build an annex next to the jail for additional courtrooms; they want a new facility and they want it to be where the old federal courthouse stands. Another proposal — razing the LCG-owned parking tower catty-corner to the courthouse, which is in deplorable condition, and expropriating other buildings on that block — has its own problems, chief among them the likelihood of lawsuits from the current property owners and the nagging fact that there’s no funding to build a new courthouse even if LCG acquired the property.

“I believe Joey [Durel] isn’t realistic in his vision of building residential Downtown,” says Perret, who adds that he supports the residential concept but sides with the judges who are holding out for a new courthouse. The judges, it should be noted, have the ears of some members of the council.

The old federal courthouse costs Lafayette taxpayers about $30,000 per year to maintain, such as it is. According to Norris, if you factor in lost sales and property taxes the site would be generating if it were already redeveloped and part of the commercial footprint of Downtown Lafayette, the bill rises to $200,000.

In practical terms the impasse is political: The DDA and Durel administration want to redevelop the old federal courthouse into a mixed-use development to promote a residential component Downtown through private developers guided by DDA and the Downtown Development Code; the judges and clerk of court want a new parish courthouse at the site.

The lingering question is, can Durel and the DDA rally enough votes on the nine-member City-Parish Council to push through their vision for Main Street?

It’s unlikely Durel will be able to pull this deal together in the nine months he has left as city-parish president, but his successor should make a priority of addressing both redevelopment Downtown, especially the residential component, as well as the embarrassing infrastructure of our parish’s judicial system.