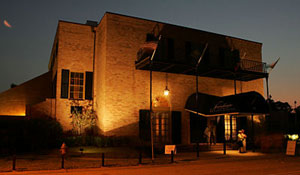 Employees at Lafayette's Townhouse Restaurant and Caterer got a surprise when they arrived for work today: their paychecks attached to a letter from owner Art LeBlanc informing them that the business had shut down. "We got a letter from the owner saying that he wanted to concentrate on his other businesses," one employee who asked not to be identified told The INDsider. A landman, LeBlanc also owns Sterling Automotive Group.

The letter thanked employees and patrons and stated that booked catering events would be honored, noting that catering would continue for "a considerable period of time." What that means is unclear.

"I can tell you we're taking bookings," Townhouse General Manager Paul Scelfo told The INDsider this morning. The manager was not specific about how long the catering operation would continue, declining to comment beyond the letter.

Originally constructed in 1968 as a private club called Lafayette Townhouse Club, the Oil Center building had been vacant for years before LeBlanc purchased it in late 2004. He paid Crowley businessmen David and Peter John $1.25 million for the 2.5-acre site, according to the Clerk of Court's office. The John brothers bought the property from a prominent Lafayette group — Charles Chatelain, Tom Galloway, Wayne Elmore and Dr. Paul Azar Jr. — for $1.03 million in October 2002. Court records show that in 2000, that group paid $850,000 to Lafayette Townhouse for the land and building.

LeBlanc reopened the facility in the summer of 2005, having invested a considerable amount of money in an extensive renovation that included closing in the pool to create a garden terrace. Working for LeBlanc, architect Kevin Gossen restored the interior, blending contemporary finishes with much of the original elements like the parquet flooring, chandeliers and staircase banister. Though beautifully appointed, the restaurant never quite caught on with local patrons.