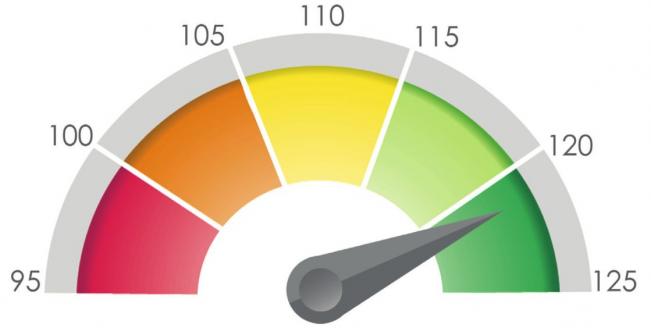 Lafayette’s economy today is very much like a tale of two cities. Retail sales hit an all-time high of $6.4 billion in 2014, and January 2015 was the highest January on record. Lafayette’s unemployment rate is among the lowest in the state. Residential building permits continued a two-year upward trend and had a 12.1 percent increase over 2013 numbers. The positive momentum of Lafayette’s economy has been undeniable in recent years. However, depressed oil prices and news of layoffs from energy companies (with, for the most part, no indication yet of the eventual local impact), there is a growing uncertainty in the area’s economy.

Through the Economic Performance Index, LEDA hopes to explain the changes the local economy is facing and present the data to you in an easy-to-understand format.

The December 2014 Index is 121.1, up 1.6 percent compared to December 2013. The index at the end of the fourth quarter showed a half-point decrease from the end of the third quarter. The index has been above 120 for almost all of 2014 and hit an all-time high in June. Since 2012, the EPI has consistently moved upward until leveling off in the second half of 2014. While the EPI is above the 12-month moving average, it is the closest we’ve been to the average in the past two years. The index’s position relative to the 12-month moving average gives an indication of how the overall economy is faring. LEDA will continue to monitor and report on any trends that materialize with the 12-month moving average in the first quarter.

Lafayette’s economy has steadily grown, with the index increasing 18 percent since hitting a decade low in August 2009. This economic prosperity has created many opportunities including recruitment announcements for more than 1,200 jobs in the past year and a half. These companies are now bringing their clients and suppliers to Lafayette, creating a positive ripple effect in the economy.

The amount of recent projects and investment in Lafayette is a reflection of our economic strength and diversification. Our economy has thrived from the success of the energy, medical and entertainment industries (tourism, recreation, retail, etc.); and the emerging technology sector will be a fourth, stabilizing leg for our economy. While the local economy has diversified its industry base, we must still closely monitor changes in the energy sector, since up to 45 percent of the local economy is either directly or indirectly tied to energy. The EPI will help us quantify the impact of depressed oil prices as 2015 progresses.

Historically the Acadiana region has been a hub for energy production and services in the southeastern U.S. and the Gulf of Mexico. Today, Lafayette has positioned itself as a medical, transportation, entertainment, education, finance and retail hub. Because of this economic diversification and current political conditions, today’s downturn in oil prices should not be a repeat of the situation seen in the 1980s. Along with overall economic diversification, diversification within the energy industry will also help to mitigate the impact. Due to contractual obligations and investment costs, not all areas of the industry will be quickly impacted by lower prices. In particular, the outlook for deepwater production remains positive. As such, companies will continue drilling and production on richer, proven fields, while delaying work on new plays.

When looking at all 15 indicators as a whole, the first half of 2014 was off to a terrific start but plateaued in the second half due to shifts in some leading indicators. In the fourth quarter, local stocks prices, manufacturing hours, drilling permits and new unemployment claims dropped off, which leaves the other indicators and the overall economy in an uncertain state. It is expected that the current indicators including retail sales, employment and hotel receipts will see a downward shift in the first quarter 2015. The second quarter 2015 will probably see lagging indicators such rig counts, unemployment rate and duration of unemployment soften.

Read the full fourth quarter EPI report here and be on the lookout for the first quarter EPI, which will be published in conjunction with the fourth annual State of the Economy luncheon on Thursday, June 18, at the Cajundome Convention Center at noon. 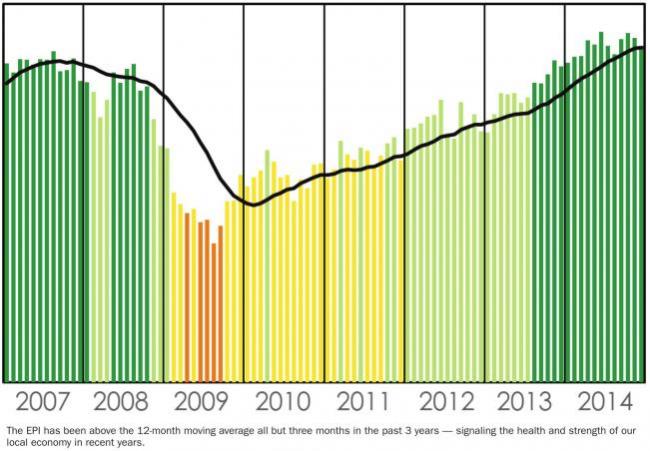