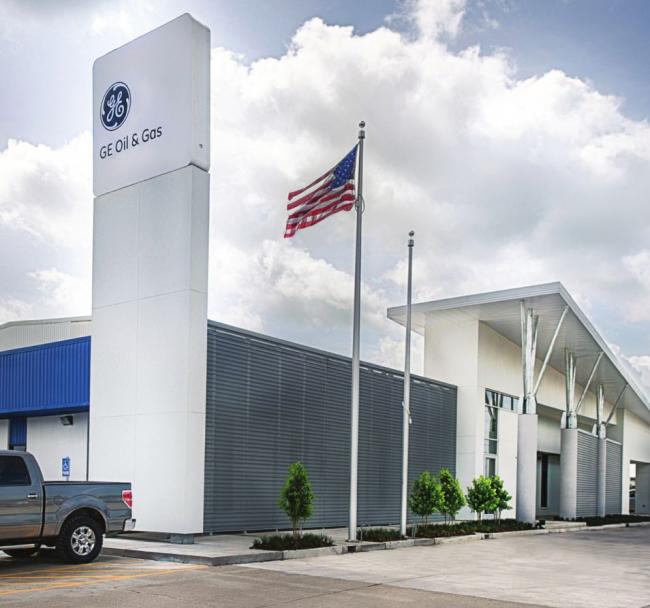 The new GE Oil & Gas facility off Highway 90 gets its corporate identity.

After General Electric Oil & Gas acquired the old VectorGrey campus off Highway 90 in Broussard, it approached Abell + Crozier + Davis Architects with the daunting task of bringing the entire facility up to current branding standards while still maintaining its daily operations, all within a two-year time frame.

“It was a really invasive project, but we were able to keep them operating throughout the whole process,” says project manager Matt Baker. “Essentially, we filled up three quarters of their remaining land and did not interrupt their day-to-day operations.”

The tight turnaround enabled GE to base its repair operations in Acadiana instead of splitting them between Broussard and its larger facility in Houston. This way the company could concentrate on new products in Houston while leaving the repairs of such products in Broussard.

“This facility is intended to be kind of the Gulf Center for repair for GE,” says Baker.

The 7-acre facility had a roughly disjointed campus, which was built in the early 1980s, with a main offi ce building surrounded by several metal buildings. ACDA took the opportunity to give the main office building some height and additional layering so that it would have a larger presence along Highway 90. For instance, the front canopy is held up by tubular trees with concrete bases to resemble rigs operating in the Gulf.

The team also created an all-new façade for the building, including the integration of a large pylon sign of considerable height complete with the company’s branding, which is accented by a large sweeping roof that announces the entrance in a way the old one didn’t. — Wynce Nolley