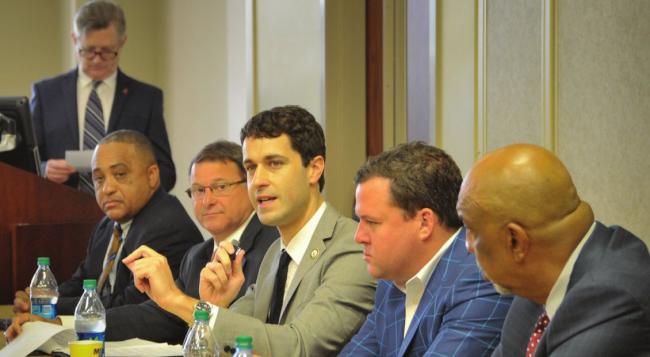 The annual spring legislative session is just under way in Baton Rouge as lawmakers grapple with a $1.6 billion budget deficit and the difficult job of closing it. Louisiana’s Constitution requires a balanced budget, but that same Constitution has also become bloated over the years with protections for pet funds and programs, leaving little outside of higher education and health care subject to cuts. Pile on Gov. Bobby Jindal’s fealty to Grover Norquist’s “pledge”— no tax hikes under any circumstances unless offset by equal spending cuts — and the situation only grows more dire.

Painted into a corner by the legislative majority’s acquiescence to Jindal’s supply side absolutism, many at the Capitol including members of the governor’s own party might finally be feeling some urgency.

Legislators are scrambling to find sources of revenue to mitigate even more cuts to universities and health care. Jindal has proposed repealing refundable tax credits the state pays out to businesses for inventory — a move Norquist has countenanced by calling it a “revenue reduction” — but that will face stiff opposition from special interests led by the influential Louisiana Association of Business and Industry, headed by Jindal’s former chief of staff, Stephen Waguespack.

Enter another Jindal appointee, current Revenue Secretary Tim Barfield, who revealed in early April that some of the biggest companies doing business in Louisiana pay little or no income taxes.

Barfield came to the startling conclusion after his office studied why state revenue hasn’t kept pace with economic recovery over the last few years, the reasoning being that if businesses are returning to profitability there should be an attendant rise in their income taxes.

According to the Associated Press, Barfield found that companies are “aggressively using tax avoidance options and tax breaks to avoid owing anything to Louisiana.” Not a shocker, really.

“You’re talking about literally dozens and dozens of potential areas of discretion. It all starts to add up pretty quickly to minimize your exposure. You combine that with our generous tax exemptions and other things, companies are paying very low taxes in Louisiana,” Barfield told the AP.

“Some of these companies, what they do is they’re locating their company [headquarters] in a state that doesn’t have an income tax and then they’re filing as zero [income] in the state of Louisiana because even though they may have a retail outlet in Louisiana, they’re showing [their income] as nothing and showing that they’re gaining all that money in a state that doesn’t even have an income tax on it,” explained state Rep. Stephen Ortego, D-Carencro, at an April 10 legislative forum in Lafayette co-sponsored by One Acadiana and UL Lafayette.

“What they do is rig the system,” Ortego added.

Two Republican state lawmakers, Sen. Robert Adley of Benton and Rep. Julie Stokes of Kenner, have filed bills designed to close some of the loopholes and alter the way companies report income. One of the proposals, requiring businesses to submit combined reporting when they are structured as multi-state entities thereby making it easier for the state Department of Revenue to better account for earnings within Louisiana, is already in effect in about half the states.

All five of the state lawmakers who participated in the UL-One Acadiana forum on April 10 at the Picard Center — Reps. Ortego, Vincent Pierre, Stuart Bishop and Terry Landry, and Sen. Page Cortez — agreed that the Legislature will have to take a hard look at a lot of tax exemptions and credits and other business incentives Louisiana currently offers.

“I think if we’re going to give away taxpayer money, we need to see a return on our investment, and a lot of these credits, we’re not seeing that return,” Bishop, a Republican, acknowledged.

Yet much of the talk, in press reports anyway, leading into the session, centered around tax credits offered to the motion picture industry.

Ortego characterized that as reaching for low-hanging fruit: “When you look at [the film industry], it’s actually not even in the top 15 on our exemptions budget,” the first-term Democrat noted. “People don’t realize that we have other exemptions that are costing us a lot more than the movie industry.”

“I think we need to continue to massage what we’re doing and keep growing it, so I’m going to have a hard time voting against the movie industry,” said Pierre.

Barfield told the AP that while seeking legislative fixes to the many loopholes that allow corporations to dodge taxes in Louisiana might not happen this session, “it’s great to get the conversation started.”

Added Ortego at the forum: “There are tons of these rigging-the-system things that we need to be talking about rather than talking about movie tax credits.”