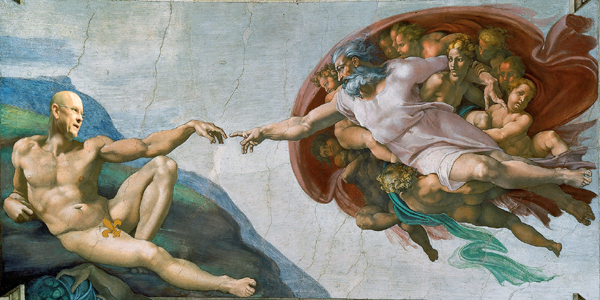 City-Parish President Joey Durel is putting a resolution before the City-Parish Council Tuesday that would display the U.S. national motto, In God We Trust, prominently at City Hall. The council will dutifully pass the resolution. Who, after all, doesn’t trust in God?

Durel’s newfound public piety is not coincidental or without precedent: It’s part of a movement among conservative elected leaders over the last decade to place “In God We Trust” in prominent locations at government buildings. St. Martinville and New Iberia were recent additions to the so-called “In God We Trust Movement,” a phenomenon that is coast-to-coast and border-to-border, though generally exclusive to jurisdictions with Republican majorities. Think of it as another theater in the Culture War.

The “Whereas” preamble to the resolution — these are typically presented as resolutions, which are voted on day-off and become policy immediately if approved, as opposed to ordinances that take two weeks between introduction and final vote; that’s part of the game plan — gives a hint at its goals beginning with the first: “Whereas, ‘In God We Trust’ became the United States National Motto on July 20, 1956, shortly after our nation led the world through the trauma of World War II...” 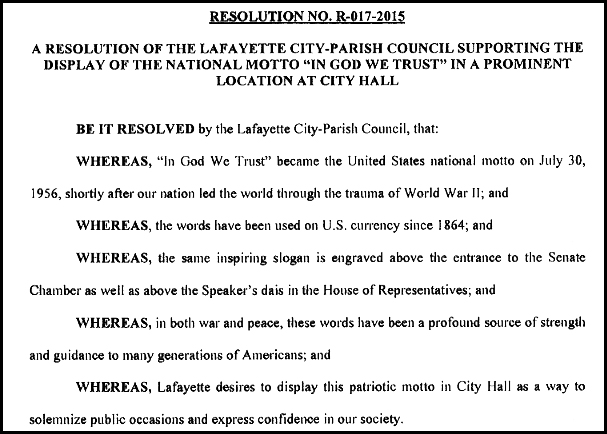 The appeals to patriotism and the conflation of religion and democracy are central to the In God We Trust Movement. “Shortly after” in this case is actually 11 years after World War II, and it’s not coincidentally at the height of “The Red Scare,” i.e., heightened national anxiety in the United States during the 1950s over the spread of godless communism, prompting the U.S. Congress to replace the Founders’ original motto, the elegant and Latin “E Pluribus Unum” (From Many, One), with In God We Trust and also to add “under God” to the Pledge of Allegiance.

The resolution caught the eye of a group known as The Original Motto Project, which keeps tabs on the In God We Trusters and encourages city councils and other legislative bodies considering plastering In God We Trust onto government buildings to consider instead the Enlightenment-inspired motto favored by the Founders. The Original Motto Project, it almost goes without saying, is nearly always unsuccessful in its persuasions and appeals to diversity.

The group sent a letter to members of the City-Parish Council last week:

It has come to our attention that your council will be considering an In God We Trust sign on your city chambers and I would like to introduce you to a new movement in America as an alternative or even an addition to the current resolution.

We are on a mission to have the words E Pluribus Unum in every municipal building across the country.

We believe that the phrase E Pluribus Unum promotes the truly inclusive nature of American society.

In 1776, the newly formed nation needed an official seal for use on its document. To accomplish this, they assigned Thomas Jefferson, John Adams and Benjamin Franklin to create one. While their design was turned down, it brought to the discussion one of the greatest phrases ever to be offered as a motto for these United States.

The phrase “E Pluribus Unum” was accepted in 1782 as the motto on the official seal for the United States government. It is in use on several federal seals and is prominent on all our currency.

That is the original motto, as our founding fathers intended. It was no accident that this phrase made it onto the official seal.

We are a nation of diversity. Our strength comes from our differences. We are able to accomplish much more when we work together as a unit than we ever could as individuals.

This is what makes America great. Our early history shows this when the thirteen independent colonies banded together to stand up to tyranny. And again when they joined to create the greatest nation on Earth. Out of these many and very diverse colonies came the one United States of America.

There is a movement in America’s cities and counties to install the words “In God We Trust” in every single government building regardless of the opinion of the citizens. This, if it were not the motto, would be easily interpreted as a violation of the First Amendment.

It has also been extremely divisive in nearly every municipality it has been discussed. It intentionally leaves out an entire section of the population, those with no belief in gods.

It is time to have a motto all Americans can be proud to say. It is time for “E Pluribus Unum.”

We are asking you to put up a plaque with “E Pluribus Unum” on your walls stating your support for our diverse community and for what this country was founded on.

The resolution also grabbed the attention of a local non-believers group.

"The official national motto is often used as a passive-aggressive cudgel to silence members of our community and devalue our place in society. Surely we can do better than to continue that legacy," says Lafayette Atheists and Freethinkers President Alex Songe in a press release. Songe says members of his group plan to attend Tuesday's council meeting and express their concerns to council members.

We’re confident, however, that Durel’s aim isn’t to underscore that Lafayette’s non-Christian population is an unwelcome participant in the civic life of our city and parish. Judaism, Islam, Zoroastrianism, Bahá’i, Pastafarianism — many of the religions practiced locally are monotheistic and thus by definition God-centered. Whether they’re centered on the God of Abraham is a niggling detail with which a deliberative body like the City-Parish Council shouldn't worry its pretty little head.