Congratulations, Lafayette, you have Cajun, zydeco and sprawl. What are you going to do about it?

That was the question that hung over a meeting room at the Rosa Parks Transportation Center May 7 as Chuck Marohn and Joe Minicozzi, consultants hired by Lafayette Consolidated Government in conjunction with the PlanLafayette comprehensive plan and Unified Development Code, delivered their long-awaited Return on Infrastructure Investment Tool presentation.

Marohn and Minicozzi and a team of analysts and planners have been studying Lafayette’s growth — historic and current — and developing visual data models of where we are in terms of development and the stresses it places on our tax base.

“There are a lot of things that are unique about this place, but in terms of the stuff we look at — the data, the land-use patterns, the decisions the city’s made on where to build roads, where to extend sewer and water — it’s very ordinary, it’s very much like everybody else,” Marohn noted. “Every city in the country has done the exact same stuff that you have here. There’s nothing remarkable about it, and I say this because we are having a dialogue at many levels of government right now about what’s going on with our cities, because our cities have experienced decades and decades of growth and robust growth, and we still don’t have the money to do basic, basic things.”

Lafayette, like virtually every city in America in the post-World War II 20th century and beyond, built “out” rather than “in” — extending roads out to suburban subdivisions and shopping centers as it abandoned its urban core. The growth mirrored the rise of car culture in the United States, and it provided immediate benefits in terms of robust economic activity. Building subdivisions creates jobs, not just among builders but among the suppliers of wood, concrete, pipes, shingles, windows, asphalt. Auto dealers sell a lot of station wagons and later minivans. Grocers are in tall cotton. And that economic stimulus creates revenue for the city through sales taxes and property taxes.

“These aren’t invisible market forces that are making me develop a certain way in your community,” Minicozzi noted. “Sometimes they’re good policies and sometimes you can hurt yourselves with them. But there are things that drive the market to make decisions that financially, from a community standpoint, may put you upside down.”

Upside down as in roads get potholes, pipes rust, streetlights and traffic signals fail, and all that extended infrastructure becomes a long-term liability for a city.

When this writer moved with his family to Lafayette at age 4 in 1971 we settled into a house on Broadmoor Boulevard in what was then the southernmost subdivision in the city of Lafayette. Nearby Ambassador Caffery Parkway was still called New Flanders Road, a two-lane strip of asphalt that dead-ended at the Vermilion River. South of that was farmland extending to Milton, Maurice and beyond to Abbeville. Now Lafayette, the city and unincorporated parish, is a patchwork of subdivisions skirting Johnston Street roughly all the way south to the parish line, with the Johnston-Ambassador Caffery corridor serving as a major nexus of commerce and newer commercial corridors sprouting up south of the mall.

That’s a lot of development in less than 45 years — and that’s just south Lafayette — and with that development comes the high cost of maintaining all the infrastructure.

“You can continue to kick this can down the road and perpetuate the problems that we’ve learned about since the ’90s, and we’ll still have these problems,” said Minicozzi. “You have to figure out what you can work with: You can raise taxes or you can cut services, or you can start to deal with your development patterns differently.”

When City-Parish President Joey Durel was a former pet store owner running for office back in 2003, he was fond of saying he planned to run Lafayette like a business. A few years at the helm and Durel moderated that tune, realizing that cities can’t be nearly as flexible as businesses in adjusting to a changing economy or dealing with exigencies like flood and hurricane recovery.

As Marohn writes in a May 11 post on the Strong Towns blog:

A city is not a business for a number of obvious reasons. A city cannot be liquidated in a bankruptcy. If Lafayette fails, New Orleans does not get to purchase its tax base at bargain prices and make productive use of them. Lafayette does not get to rid itself of its obligations to provide services, even through bankruptcy. It is stuck with miles of roads, miles of pipes and thousands of acres of area along with all the good and bad financially that comes with that.

And, of course, a city is us: it is a corporation established to help people living together in a community collectively do things that would be difficult, or impossible, to do as individuals.

“This is critically important to use as a tool to figure out whether or not this is sustainable,” Minicozzi said of the Return on Infrastructure Investment study, “and it’s clearly not a sustainable model.”

A series of 3-D illustrations used during the presentation showed where Lafayette gets the most bang for its buck in terms of allocating infrastructure resources: Downtown and River Ranch.

Those parts of town, especially the latter, feature mixed-use development that generates a lot of property (and sales) taxes per acre. A Walmart also pays a lot in sales and property taxes but, unlike for example the Chase Tower Downtown — the tallest building in Lafayette, which has its own parking tower — eats up a lot of acreage to conduct its business, especially for parking.

In fact, among the many developments the team studied in assessing the city and parish, the Chase Tower is far and away the best investment, generating more than $132,000 annually in property tax revenue per acre. By comparison, Acadiana Mall — which generates the most net revenue in sales taxes and property taxes combined but is a sprawling campus surrounded by vast parking lots — only pumps about $3,500 per acre in property tax revenue into local coffers annually. That’s slightly better than a typical Walmart’s yearly property tax bill ($3,200/acre). The Gordon Hotel Downtown, which is now a mixed-use building with a restaurant, offices and retail, generates a relatively whopping $56,000 annually per acre, while Northgate Mall, bless its heart, manages under $1,900.

What it comes down to is density, but it doesn’t change the fact that Lafayette built itself into sprawl over the last half century and there’s a lot of far-flung infrastructure on the margins of the city that must still be maintained. The farther we move away from the core the more expensive it gets, but we built it and it’s our responsibility.

That, Marohn and Minicozzi noted, is where politics enters the picture. As Minicozzi said, there’s much we can do going forward to arrest future sprawl and grow more prudently — that’s what Plan- Lafayette and the UDC were designed to address — but our community will also have to make hard decisions about raising taxes or trimming services.

By Marohn and Minicozzi’s estimation, a typical household in Lafayette living in a median-priced home ($150,000) would need to pay an additional $3,300 in property taxes just to maintain the roads we currently have. For all the infrastructure — drainage, sewer, water, etc. — that figure rises to about $4,000.

The May 7 Return on Infrastructure Investment Tool presentation was held, coincidentally, on the same day that the LCG-created Future Needs/Funding Sources citizen committee released its draft report after a year of studying LCG finances and revenues; the Future Needs committee came to the same conclusion: Taxes will have to go up if we want to continue to enjoy the same level of services we’ve come to expect from LCG, although the Future Needs committee didn’t arrive at specific numbers like $3,300 or $4,000. (See Page 4 in Turk File for that story.)

“When you consider that the median household income for a family in Lafayette is $41,000, the idea that 20 percent of that would go toward just maintaining local infrastructure is kind of an absurd number, yet that’s the numbers that we’re looking at just to maintain what’s already been built,” Marohn said.

We all know that a majority of voters would balk at such a proposition, no less in this age of the tea party, which is arguably short-sighted but a political reality nonetheless.

“What we’re trying to leave here is a model — to give you some measurables to look at this stuff,” added Minicozzi. “Ultimately I know that there’s politics in your community — there’s politics in every community. We’re ironically a country that was created on a tax revolt, yet we’re not clear about the literacy of our own taxation to see what’s going on around us.

“These are conversations that you all need to have.”

“The exciting thing about Lafayette right now is that you are leaders in asking really tough questions about your place,” Marohn noted. “This conversation could not happen in most communities; most community leaders would not say, ‘Look, we’re short on money, we seem to have these structural problems. Let’s invest some time and energy and money in trying to figure out why. Nobody else is doing that. You guys are asking the hard questions first.”

But Marohn’s pep talk at the close of the presentation was not without a caveat: “That makes you pioneers, but sometimes pioneers get scalped.” 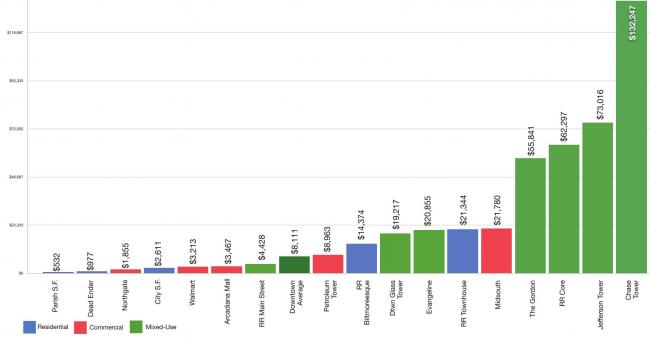 2015 Tax Yield Per Acre: This chart, presented at the Return on Infrastructure Investment presentation, shows that density pays off. While a sprawling commercial property like Acadiana Mall generates the most net revenue in propety taxes and sales taxes annually, its property tax bill is a relatively modest $3,500 acre, less than half of what an average property Downtown generates and manyfold lower than the Chase Tower on Jefferson Street, which is good for a staggering $132,000 per acre in annual property taxes.