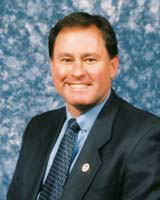 Local Democratic Party officials had been looking to former state Rep. Gil Pinac as their go-to candidate in challenging incumbent Republican Congressman Charles Boustany this fall. Pinac, who lost a bid last year for state Senate, is a Crowley Democrat in the mold of former 7th District Congressmen Chris John and John Breaux. However, at a caucus meeting last Saturday of party officials from across the 7th District, Pinac broke the news that he would not be entering the race. “He told us he made a decision that this wasn’t the right time for him to run,” says John Bernhardt, chairman of the Lafayette Parish Democratic Party Executive Committee. Bernhardt is still holding out hope that a Democrat will emerge to run against Boustany, but says “as of this moment there’s no candidate.” Pinac did not return a call for comment.