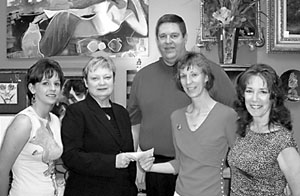 SOLA Communications promoted Steve Landry to sales manager of both the Telecommunications and Safety and Controls divisions. Art Gunnells has been named training manager for the company.

The Wright Group announced the promotion of Joel P. McSpadden to general manager and the addition of Stepanie D. Pitre as controller.

Right Angle has relocated to downtown Lafayette at 720 S. Washington St. and has also released a new logo.

Teche Holding Co. reported second quarter net income of 66 cents per diluted share, an increase of 4 cents or 6.5 percent compared to the same quarter in 2004.

Van Eaton & Romero announced Richard Tanory as director of agent development. Tanory has been with the company for 13 years.

Duane Boudreaux, 2005 Acadian Home Builders Association president, announced AHBA as a supporter of Fiber to the Home. Also at AHBA, the organization's May meeting awarded funds to local charities, educational programs and the AHBA Women's Council.

Jimmy A. Jennings was recently recognized by the Sunderland Group as being the No. 1 agent in America for the last quarter of 2004 and the first quarter of 2005 in overall annuity sales production.

The Acadian Museum in Erath inducted Stephen J. Langlinais and the Rev. Perry Sanders into its Order of Living Legends in May.

RE/MAX Acadiana has partnered with Deaf Link to provide an estimated 429,000 deaf and hard of hearing citizens with a "live" certified sign language interpreter through the Internet.

Stephany Cornay-Dugan and Greg Dugan presented a check for $1,000 to the Lyn Fontenot Interior Design Scholarship Fund at the University of Louisiana at Lafayette.