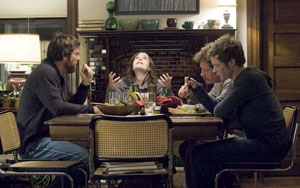 The smartest person at the Wetherhold dining room table isn’t an immediately obvious choice. Dad Lawrence (Dennis Quaid) is a tenured professor of English literature at Carnegie Mellon University; he’s got the distracted and disheveled academic air to prove it. Daughter Vanessa (Ellen Page) is a model student, studying dutifully for the SATs and helping to run a Young Republicans club after school. Son James (Ashton Holmes) is a typical college student by day, a surreptitious poet by night. Dad’s trying to get a new book published and vying for the top spot in his department, daughter’s got her sights set on Stanford, son just got a poem accepted by the New Yorker.

But then there’s Chuck (Thomas Haden Church), a rough-around-the-edges, regular-guy freeloader whom Lawrence always pointedly and exasperatedly refers to as his “adopted brother.” Chuck, if it must be spelled out, is in many ways the room’s most intelligent occupant. Sure, he smokes pot and drinks beer with his underage niece and drives his brother to distraction with his constant need for cash, despite a string of odd (and odder) jobs. But Chuck is the one that sees the widening cracks in his family’s facade, and he’s one of those Smart People that knows that a head is simply no good without a heart to match.

Underneath all the bright ideas in the Wetherhold house, there is the tarnish of loss. Mom Caroline died a few years back. Lawrence stopped caring about his students ages ago, his heartbreak and disappointment curdling into contrarian arrogance and outright avoidance. He’s retreated into an ivory tower of pissy epistemology. And in case anyone’s not picking up on his misanthropic misery, he never fails to take up two parking spots whenever he can, just because he can. Tightly wound Vanessa can’t stop worrying about her dad: his career, his meals, his fledgling interest in former-student-turned-doctor Janet Hartigan (Sarah Jessica Parker). The 17-year-old craves his attention, yet wants Stanford precisely because it is a continent away. James mostly keeps to himself, writing his words and racking up credit-card debt at local bars.

All of which makes director Noam Murro’s Smart People sound terribly depressing. It really isn’t. Screenwriter Mark Poirier pens charmingly broken characters that are startlingly well-acted. These are people we know. These are people we are. Poirier, in his first script, spins a story which shows us that sometimes actually changing isn’t as important as simply wanting to.

These characters — and the talented ensemble of collected actors — are by far the best things about Smart People. Quaid discards his Joker-wide grin and easy physicality to make Lawrence a disengaged man who’s still somehow absolutely likable in his complete inability to deal with people. Vanessa is in danger of following in his footsteps, but she’s got a wickedly witty sense of humor and a carefully hidden fragility that Page pulls off perfectly. Church’s Chuck is a mess, but he’s a swirl of goofy, good intentions and a laissez-faire kind of love that speaks to his own loneliness. As the bewildered Janet Hartigan, Parker manages to be a quiet mess without slipping into any kind of a caricature of a successful single woman.

The story they inhabit isn’t flashy. Lawrence, in the throes of a temper tantrum, climbs a university fence to retrieve his briefcase from his impounded car. (He’s been towed from his latest two-spot parking job.) When he falls from the fence, he suffers a trauma-induced seizure. ER doctor Hartigan informs him that this means he can’t drive for six months; her neurologist coworker informs him that she used to be one of his students. Chuck’s been needing a place to stay, so he moves in and assumes the role of chauffeur. Lawrence, who hasn’t liked anyone in a very long time, takes a liking to his ER doctor and stumbles through a disastrous first date that turns into a stop-and-start romance. There are subplots about Lawrence’s new book and about the awkward ways that Vanessa and Chuck attempt to relate to each other, detailed little digressions that sketch in the nuances of personality.

The only real problem with the very engaging Smart People is that it doesn’t know how to end, so it just sort of stutters to a stop. The final scene — of Lawrence in the classroom — rings false. But as the credits begin to roll, there is a second final scene, a wordless pairing of Lawrence and Chuck that would have made a lovely, ambiguous ending for such a sweet-and-sour movie. That momentary respite, however, is promptly ruined by a set of equally false still-shot reveals.

In a way, the movie’s misshapen form follows its function. Part of the point of Smart People is to prove that all endings are hard, even the endings that eventually lead to new adventures.